I’m writing this from Sandringham camping and caravan park, located in a wonderfully peaceful wood next to the estate. There’s a pigeon watching me curiously, I have my suspicions about pigeons.

Using my iPad which unfortunately doesn’t have any of the photos from the last couple of days, so will try and upload them separately from my phone if I can get that connected.

01 May 2013 – Leg 1 to Happisburgh
Having packed and repacked my panniers a few times I was finally ready to leave, on a mostly balanced but pretty heavy bike (think we worked out it’s about 90 pounds), at about 10.30 on a gloriously sunny Wednesday. Lost my passport somewhere but I’m sure it will turn up, probably at the bottom of a pannier at the end of the tour.

Had a great send off from home from my parents, brother and sister in law plus nephew, Lu’s parents, Chris, Jen, Eve and Willow. The latter two were have great fun banging a drum and blowing a trumpet – thanks for the fanfare girls!

Pedalling off with a certain amount of trepidation, and wondering what I’d forgotten, I passed through Norwich before stopping in at work to say bye for 3 months. Got another great send off so left Norwich feeling buoyant.

Had a lovely ride through the Norfolk countryside down to Lowestoft, accompanied by birdsong; lots of skylarks making themselves known at present. Less pleasant were the regular swarms of midge like bugs I cycled through, there were a lot of them, and I think I swallowed quite a few; hopefully good protein?

Made Lowestoft, the Eastern most point of Britain, in good time, whereupon I ate a pork pie in celebration, then had another one for good measure whilst I was waiting for the bridge to come down. Continuing on up the coast I passed lots of shipping activity around and in Great Yarmouth, before cycling along the seafront. There really are a lot of arcades there, and fish and chip shops, I didn’t stop apart from at the traffic lights. It looked okay in the sunshine but not my favourite place on the tour.

It appears my Garmin Edge might have a sense of humour. When plotting out the routes I’m sure I specified paved routes only, so I was a little perturbed when it started directing me down narrower and narrower lanes, followed by tracks. Wasn’t too bad for a while, then I hit sand, at quite a speed after going around a corner. A heavily laden bike hitting several inches of sand at speed, without mountain bike capabilities, does not end well, and I was unceremoniously dumped. Luckily it was a soft landing and nothing but pride damaged. My first reaction was to check no-one was watching, they weren’t, my second was a stream of pretty foul language, my third was to start giggling, it was pretty funny. Post that stunt I took things pretty easy for the next few miles, which involved pushing for a bit through the sandier section of the coastal path, before reaching a proper road near Waxham.

From Waxham it’s only a short stretch up to Happisburgh, and you can see the lighthouse from miles away so despite my Garmin’s best efforts I didn’t get sidetracked. My friend Nigel was waiting at the campsite with a cold beer which was most welcome. I may be doing this unsupported but I don’t think the occasional cold one from a friend counts against me. Had dinner at the local pub, the Hill House Inn, a very welcoming establishment with a fine selection of ales and great menu. I had rib eye steak, followed by rhubarb crumble, and a few pints of Tim Taylor’s Landlord. Parents, plus Norman and Sheila also drove up for the evening so was a lot of fun, even if rather more beer than anticipated was consumed; it’s all good carb loading tough isn’t it?

A note on Happisburgh. The cliff it sits behind is slowly eroding into the sea. I say slowly, last year I think about 4 metres disappeared, including the tower construction which was there to provide access via steps to the beach. Unfortunately the campsite I stayed at day’s might be numbered but it’s a lovely place to overnight at, with a great pub just next door. Showers were nice and hot too. Recommended! We filmed there earlier this year – check out our website and you tube channel.

Pretty chilly night but I was ready for it after the food and ale, and my sleeping bag is toasty. The stars were really bright after being in the centre of a well lit city. Out to sea we could see the lights from a few rigs and shipping heading by.

A great first day, covered 75 odd miles – I’ll link to the route when I can download it from my Garmin (or Nemesis as I’ve taken to calling it). Thanks again for all the donations, support, and interest in this blog, all great motivation.

02 May 2013 – Leg 2 to Sandringham
Okay, it’s getting a bit late as I write this and I need to get a shower before an early start tomorrow, so I’ll keep this brief. Also something just howled…quite close by. They don’t have wolves on royal estates do they? I mean I know they like their hunting but pretty sure there are no wolves in the uk. I won’t stray from the path just in case, didn’t bring any silver bullets, or a gun for that matter!

Day 2 started well with sunshine and a light easterly breeze that would follow me along the coast. Realised my new cycling bib had caused a mild amount of chafing so I applied some chamois cream to the afflicted areas (don’t ask), and wore some looser kit today.

Followed the North Norfolk coast along to Cromer, then Sheringham, it went up and down a lot, and continued to do so, good practice for later on!

Met my parents for the last time in a while in Wells next the Sea and had lunch inn a nice deli – chorizo panini and samosa. They delivered a book I’d ordered off Amazon recommended by someone I met whilst out training who was interested in what I was doing – Slow Coast Home by Josie Dew. Should be good and will no doubt get some good tips.

Got a puncture post Wells, fixed, all good and passerby stopped to check I was okay, another example of how Britain is not a broken society. Passed through Hunstanton where my brother sometimes goes windsurfing – not a good wind for it today with no sales moving out on the Wash – didn’t King John lose the Crown Jewels in the Wash, or was that a tax scam, or early example of expenses fraud.

My Garmin aka Nemesis sent me down a few unpaved roads pst Hunstanton, with sandy bits, but made it through unscathed. I then turned inland through several villages before pedalling furiously uphill towards Sandringham estate, determined to get there in good time. The campsite is set in the woods and is lovely, as are the staff – one lovely lady donated £10 to the Big C when she heard what I was doing, and they recharged the ‘nemesis’ ready for tomorrow. Maybe that’s not such a good thing, might start using the back up map I brought.

Tonight I’ve remembered to do my stretches so hopefully won’t be stiff tomorrow, as have an 80 mile leg to complete. Also had fish and chips from a van that is fortuitously here on a Thursday, most welcome. Had quite a few cashew nuts to boost calories and replace the salt I lost today. Will have a Berocca tomorrow morning to boost minerals etc.

Just heard the estate clock bells ring 10 o-clock so better sign off, and something just howled again. Hopefully you’ll hear from me tomorrow…

Actually, my live track didn’t work today but will try again tomorrow, and if it fails again due to reception will post where I’m passing through and at pertinent updates via twitter. 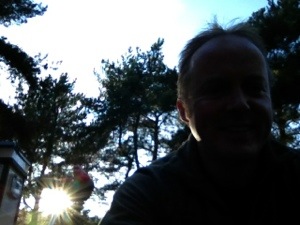 …now a fox is barking, gotta love the countryside.