After a slightly slower start to the day I was on the road by about 10 o’clock, post a breakfast of porridge etc. I’m going to have to get something different for breakfast, perhaps even cereal which I usually abhor but now is seeming a more attractive proposition, probably as my body is craving more carbs. Can you still get sugar puffs? Used to like them, or shreddies, not sure about some of these new fangled cereals, and coco pops are right out I’m afraid.

Back to non-cereal based conversation anyway. The nemesis device still wasn’t working so was reliant on my road atlas map; I’d removed all the relevant pages from my 2010 road atlas before leaving so I could just have the relevant ones to hand, and had a handy map case to put them in, over my bar bag. The Garmin was relegated to a paperweight to tuck my map case under for the time being.

Things didn’t start excellently on the map reading front as I went in a big circle of a few miles, nearly ending up back at the campsite, but I was soon into the swing of things an on my way to Sandsend. The beach and village at Sandsend looked great in the sunshine so I stopped for a hot chocolate at a beach cafe, before venturing into the Yorkshire national park.

I could have quite happily sat here for a few hoursmbut needed to get on my way, as had a long leg ahead of me – hill wise if not mile wise.

The first hill of the day was out of Sandsend, and a bit of a leg killer. Glad of the hot chocolate I huffed and puffed my way up to the top without having to stop, using the lowest gear out of the 27 I have available. The hill was one of those that doesn’t seem to stop. Every time you expect it to be over you go around a corner and there’s another stretch! It was about this time I started to crave cheese.

With slightly jelly like legs I continued on through Lythe and Runswick, and several other picturesque moors villages, farmsteads, and hamlets, trying to stick as close to the coast as possible whilst not off-roading. Just before the next really big ascent I passed Boulby Underground Dark Matter Research Lab, which sounds intriguing. Haven’t had a chance to look it up yet, however they are no doubt unravelling the mysteries of the universe. I wondered briefly if they could help with aching legs and heavy panniers, maybe some kind of dark matter fuelled anti grav system. Doubt it, but didn’t have Prof Brian Cox to hand to confirm; he seems to be the latest in-vogue scientist that knows everything. I preferred Jonny Ball.

I had to stop halfway up Boulby hill, it had annihilated my legs by that point and I was in danger of going backwards it was so steep. The photo doesn’t really do it justice, but shows off the lovely countryside.

I pushed the rest of the way up the hill, then pedalled on through Brotton and Saltburn, where I stopped at a spar for a bacon roll refuel, and to pick up a few supplies. Next was a descent out of the National Park, which I was sorry to leave behind as the industrial North appeared on the horizon, with chimneys aplenty spouting various vapours lending a slightly noxious quality to the air.

At least it was flatter, and undeterred I pedalled on to Redcar where there were several rigs visible out at sea, as well as wind farms. I’ve passed lots of wind farms and they don’t bother me. Got to be a good thing producing clean energy, as long as any adverse impacts are understood. You can’t put them up where there are lots of bats as they can make them explode – the bats explode not the wind farms, due to changing pressure around them. The other way around would be cool but worrying and somewhat hazardous. I wonder if we know the impacts of wind farms out at sea? Do they send whales astray or  slice up sea birds? Still on balance a good thing I think. 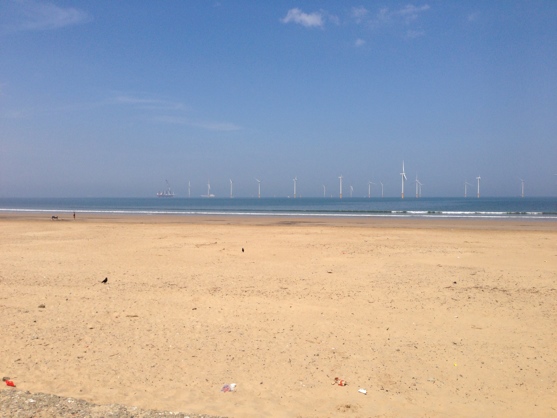 On to Middlesborough via route 1, which turned a little hazardous as I passed through some less well kept areas, with burnt rubbish and glass blocking the way a few times. I cycled quite quickly through these bits. I passed Middlesborough football club and spotted the transporter bridge over the river Tees, which I elected to take. At only 60p it was a bargain as I hadn’t been on such a contraption before. It’s a platform suspended about 3m above the water from a huge gantry, which moves the platform over the river, carrying cars, trucks, pedestrians and cyclists a few at a time.

Off the bridge I continued up the coast again through more industrial areas mingled with RSPB nature reserves. Reaching Hartelpool I decided to head out to the historical headland where there’s a gun battery and lighthouse. It’s quite a famous point, where the first shell from the lead German battleship landed in the First World War. There’s been a look out point there for 100’s of years, probably longer, including a beacon point during the Spanish Armada years to alert the local militia; don’t think we had a standing army then. 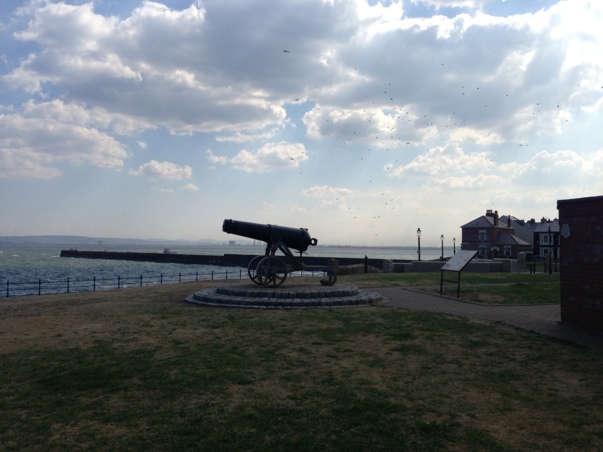 Leaving Hartelpool behind I cycled North along the coast past a choppy sea, with a strong tailwind which helped tired legs even if it was a little cold. Going rather slowly by this point I passed through Easington and Seaham, before turning inland to find my campsite at Houghton le Spring, where Lu’s parents lived ages ago. I was so tired by this point I cycled straight past it and had to circle through the town, and then back up a big hill. Thankfully the Copt Hill pub was present on aforesaid hill so I stopped for a point and to check directions. Helpful locals duly set me right and refreshed I set off back up the road to the campsite.

The long cycle was well worth it, a great campsite (The Croft), with very welcoming owners who waived the fee when they heard what I was doing – will add to charity donations. They had a barn I could put my bike in overnight, nice hot showers, and a good spot for my tent close to the kitchen where I could recharge my mobile and iPad. They want to welcome more cyclists, and it’s a well placed spot being the only decent campsite in the area close to route 1. You’ll need to be a Camping and Caravan member though, which is worthwhile for any extended touring.

Finished the day on a dinner of sausage casserole cooked on my stove, plus quite a bit of cheese! I needed the carbs after today’s 70 hilly miles. Weather due to change tomorrow so expecting rain and waterproofs for the first time. 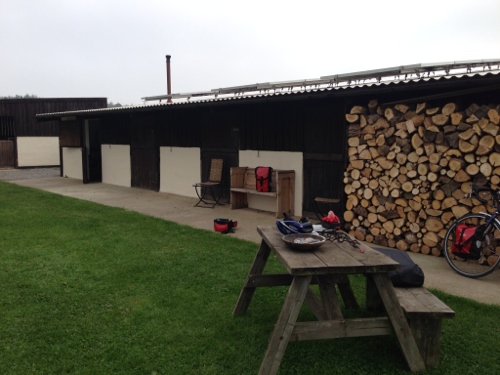 1 thought on “Leg 7 – to Houghton le Spring via Middlesborough”