Thanks for all the messages of support and sponsorship, they really help keep me going.

It had been a somewhat disturbed night’s sleep due to the South Easterly that got stronger overnight, rattling the rafters in my tent, not that it has rafters, but the canvas definitely rattled. I was up early to go and meet Mark Beaumont, of ‘The Man  Who Cycled The World’ fame, who’d I’d been in touch with over Twitter. He has a page on his website that promotes various people’s expeditions/challenges, which he’d stuck my ride up on – http://markbeaumontonline.com/your-adventure/

Mark was cycling down the coast from Duncansby Head with a team from BBC Scotland, filming a programme to air on midsummer, and he’d suggested that it would be good to meet up en-route, both to say hello, and we could do a short interview for the programme. Seemed liked an opportunity not to be missed.

I quickly breakfasted and hit the shower block, but realised I’d lost the code for the door, d’oh, needed to do my hair and everything. I ended up having to phone the warden to get in as no-one else was up and needing the loo, typical. Didn’t delay me long and I was in plenty of time to meet Mark and the crew down by the river in Thurso. They were talking to and filming two local fishermen, who’d brought along some marinaded trout and salmon to taste. Not being one to refuse an opportunity for food on this trip I got to taste some of the trout, marinaded in whisky, it was delicious.

Post finishing with the fishermen we grabbed a coffee in Thurso to get out of the cold wind for a bit, before cycling a couple of miles out of town to film Mark and I meeting up on the road, and having a brief chat about what has changed as I’ve travelled further north. Mark noticed my rear wheel had a bit of a wobble but seemed okay, something to keep an eye on though.

It was great to meet up and fun doing a bit of filming, should be airing on 21 June in Scotland, and will be on iPlayer – I wonder if I’ll make the cut. I’ll have more of a speaking part than my last foray in front of a camera, for which you’ll have to see our Arms Race movies on You Tube; definitely worth a watch if you’re a Science Fiction or Steam Punk fan.

Meeting up with Mark Beamont

Bidding goodbye to Mark on his slinky road bike, and the production crew Ed and Jenna in their far warmer land rover, I cycled back down the road to the ferry terminal in Scratsby, to catch the boat to Stromness on Orkney. Mark pedalled off to their next scheduled stop with someone who could take them whale watching, before he continued on to Sandwood Bay – a today distance of 125 miles for him, but there again he wasn’t weighed down by lots of kit! He’s got a big challenge starting on 01 June, to swim and run across Scotland. It sounds a little bit crazy, but is in aid of a great cause – http://www.justgiving.com/markbeaumontSTVAppeal

I had a few hours to wait for my boat to Orkney, however these were productively occupied, first with a large fry up in the port cafe, good value and hit the spot. I spent a bit of time updating my blog before heading down to the terminal to get my ticket and board – £17.50 for a single, bike is free, much more expensive in a car.

The trip across to Stromness was a little bit rough due it the wind, but not enough to cause at sea sickness – I don’t generally suffer anyway but there’s always a first time. I spent a bit of time in the lounge, where I nodded off on one of their comfy chairs, before going on deck to admire the scenery. 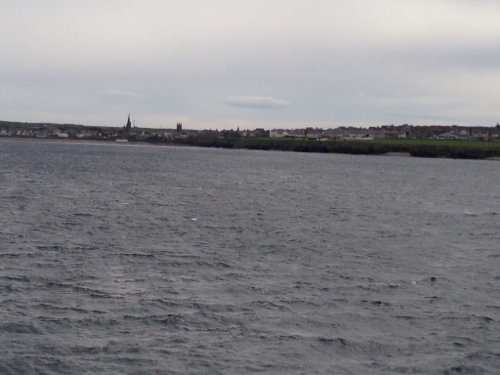 Thurso from the ferry 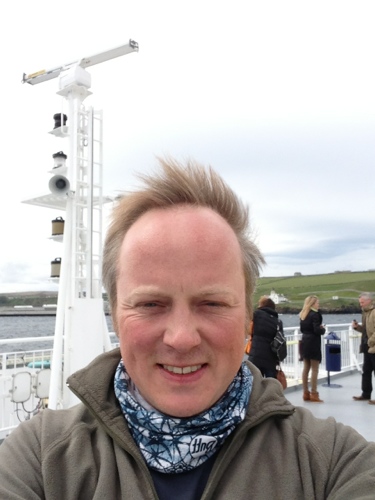 Bit windy on board

I was chatting to another passenger who pointed out how the majority of the houses, especially the older ones, are built side on to the harbour to avoid the worst of the wind. Most of the houses also have slipways down into the sea, a testament to their fishing heritage. Post disembarking I had a quick cycle around Stromness, and stopped to by a sandwich even though I hadn’t cycled much yet today – permanently hungry on this trip anyway. The older roads are laid with large paving stones, which is fairly novel and something my dad remembered from when he visited years ago. 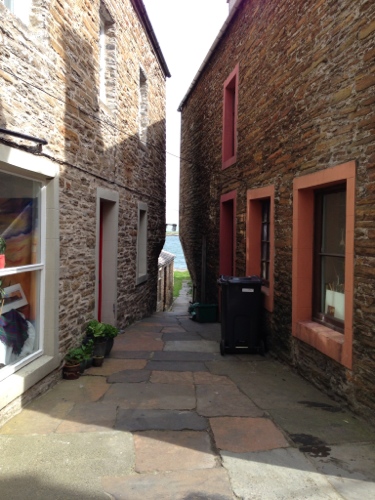 I cycled out from Stromness to Sandwick, before continuing up the coast on minor roads. The coastline is fairly hilly, although I had a strong tail wind for this first section so was easy going. I was kind of dreading the long haul back to Kirkwall into the headwind but I only had myself to blame for that.

I rode on up past various lochs and the Bay of Skaill, to Skara Brae, the site of an ancient Stone Age settlement that was uncovered in a storm which blew the covering sand dunes off. As a result the site is remarkably well preserved, and you can see the stone huts, beds, and even dressing table like constructions.

Got hit by a dust storm just after this.

From Skara Brae I continued, riding up to Birsay and slowly turning further into the wind. At one point I had to cycle through a bit of a dust storm caused by the strong wind blowing over dry ploughed fields, it stung a little and the sand-like dirt got everywhere; glad I had my sunglasses on, and had to wash my mouth out. 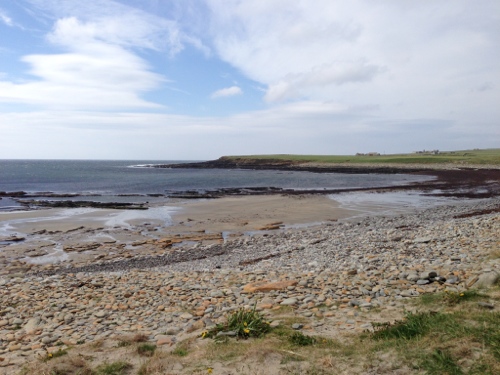 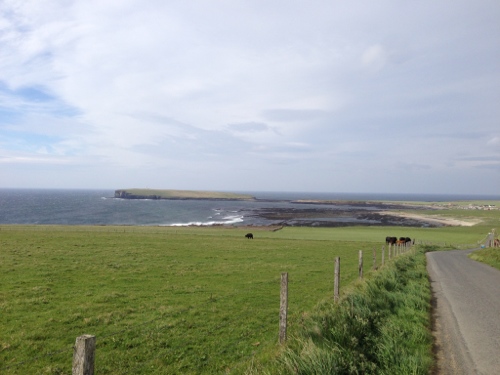 On one section I heard a ping as I rode over a bump, a pretty distinctive noise if you’ve been cycling for a while. Stopping to examine my rear wheel I found the cause of the disturbing noise, my real wheel rim was cracked and the spoke had almost pulled through. It had obviously been weakening which had been the cause of the wheel wobble Mark had spotted earlier.

Without much of a choice I carried on – I’d just have to tighten the two spokes around the break if it got worse and started rubbing. 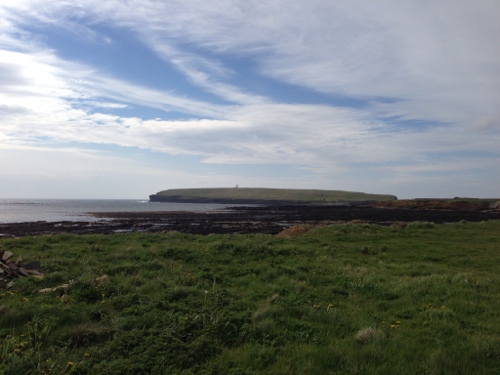 Post Birsay I turned into a buffeting cross wind, that turned into a draining headwind as I turned down towards Finstown. I nearly ran over a group of teenagers out hiking, strung across the road. They couldn’t hear me due to the wind and were walking in the middle of the road as hardly any cars around. I pedalled around the top of the island, then down through Evie, reminding myself it had been my decision to take this route and not go straight to the campsite, despite the force 5 to 6 wind. Still, the countryside and coastline made it worthwhile, even the my legs were really started to hurt. I passed a couple of potential campsites but ruled them out wanting to reach Kirkwall. Not many trees around on this island, maybe there were once and they got used for firewood and construction, or maybe it’s just too windy. 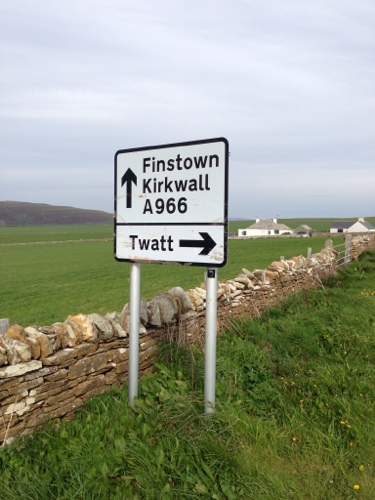 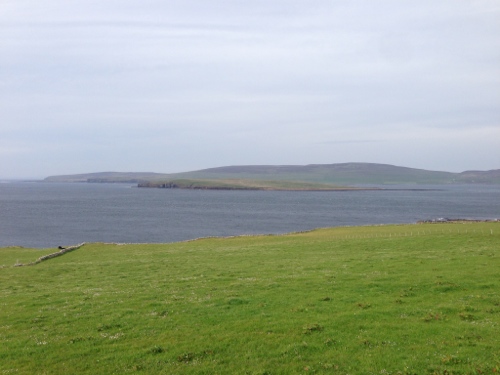 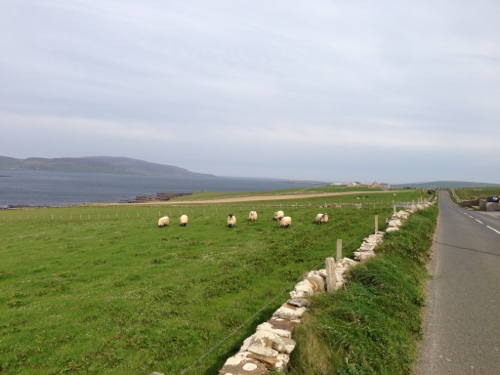 The road to Kirkwall – sheep regarding me with suspicion as usual

From Finstown I rode on to Kirkwall, gradually turning out of the wind, and arriving at the Pickaquoy campsite about 20.00. The ride had taken me at least twice as long as it would have done without the wind. And incidentally Orkney is not as flat as I’d anticipated. I guess the buckled rear wheel didn’t help either.

The campsite on Pickaquoy road is really good, very close to Kirkwall city centre, and only cost me £7.15 a night – ended up staying off two nights in the end. It has an indoor lounge area, laundry, kitchen, and great loos and showers, as well as decent free wifi. All included in the price – usually you have to pay extra for kitchen facilities, and this was the first lounge area I’d encountered. The site is also attached to a leisure centre, which will shortly have a swimming pool opening, but has a sauna, jacuzzi, massages, a climbing wall and lots of other stuff. Was quite tempted to try a massage and sauna but would depend on the weather, so much to see on Orkney.

Post pitching up I had a chat with the warden who let me know about a good bike shop in Kirkwall which I’d try tomorrow ref a new real wheel, fingers were most definitely crossed as it would be a long walk back to the ferry, and my wheel was now rubbing so much I’d had to disconnect the rear brake. Dinner consisted of a microwave meal for two from Lidyls, along with some fruit and cake. Lidyls is really common in Scotland and has some great produce at low prices. The stores up here seem to have a wider range than those down south. Will definitely be stopping at more of them on the way around.

I spent the rest of the evening planning out the next few days. Tomorrow would depend on a wheel fix, but if successful I wanted to visit the south of the island, the Italian Chapel, Scapa Flow, the Churchill Barriers, and maybe the Highland Park whisky distillery. More on that tomorrow. I also met up with a group of Liverpudlians, or self proclaimed Scousers as they wanted to be known (Fred, Spike and Richard if memory serves). The generosity of strangers is always great and heartwarming to behold; they donated £30 to the ride and Big C which was very much appreciated, especially as they’d been saving for ages to come to Orkney. They were camping too and spending the week island hopping, having a great time by the sounds of it. Come as

So a great day, only about 50 miles, but went to bed with tired legs post the afternoon’s slightly ridiculous ride to Kirkwall into the killer headwind! I’ve only got myself to blame and the advantage of touring along is you can only fall out with yourself, plus you get to stop and start when you like, and it’s easier to meet other people and make decisions.

Still finding bits of sand from the dust storm!