A decision day route wise. A paltry but challenging 54 miles covered in the end.

I woke up slightly late at the Silver Sands campsite, but to a glorious day with some great views across the bay. I had breakfast watching the oystercatchers and gulls dive about, as well as a few early bird kayakers getting ready and setting off for a days paddling. 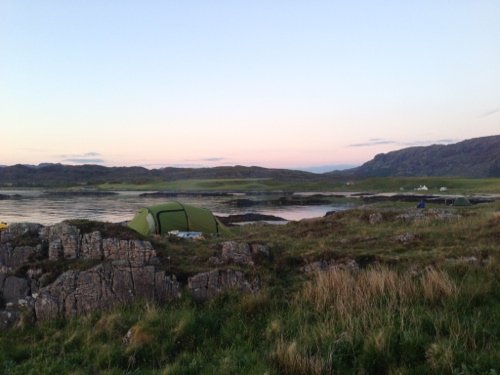 Silver Sands – kayakers setting off for the day

I had a shower and a chat with the campsite owner, not at the same time, before packing up and loading everything on to my bike. I had to tighten up a loose spoke but the wheel looked okay still, which was a relief. I watched the family camping next door set off in their kayaks for the day. As far as I could ascertain the man was Scottish, the woman French, and their three children kept mixing English and French, with a variety of accents. It looked like it was going to be a great day out on the water, with very little wind. The campsite was thronged with kayaks so obviously a very popular bit of coast for it.

Undecided on my route I rode down to Arisaig and stopped off at the hotel. It wasn’t open yet but I could use their wifi network to check out potential routes, deciding in the end to cycle to Kilchoan and get the ferry over to Tobermorry either later on or tomorrow morning depending on when I arrived. Fort William would have to wait for another day, which meant I would miss the mountain bike championships, but it didn’t make sense to go there first and then double back. I opted to ride away from possible glory at the championships, conceding victory to someone on a full suspension bike; I’m not sure my dodgy rear wheel and front right pannier fix would have survived anyway.

I left Arisaig and pedalled down the A830 in the sunshine, passing a man practicing his bagpipes outside his house on a Sunday morning. I imagine he’s popular with the neighbours – I waved but he had his hands full and just nodded, raising a eyebrow in greeting.

The railway accompanied me for a bit, through some great scenery, complete with mountains, sandy bays with clear blue seas, and not much in the way of traffic. I had to climb up a few hills but thankfully the road mostly weaves through the mountains, which was fortunate given the hot day.

I passed Prince Charlie’s Cairn, where he boarded a French Ship, leaving Britain forever after the Jacobite defeat at Culloden. It was also the site of a naval engagement between two French privateers and English ships shortly after his departure. The French were delivering arms and gold to Clan MacDonald, who ferried it ashore under fire from the British ships earning admiration from the French commander. The gold and arms were distributed amongst the clans, much to the chagrin of the Macdonalds, however it’s rumoured ‘there is still gold buried in those hills’. Back to the naval battle – the English ships had to retreat after casualties were suffered on both sides, and the French made their escape. 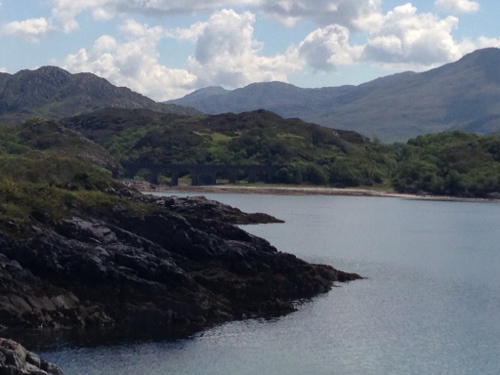 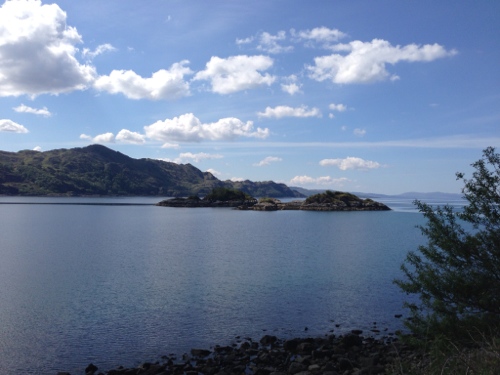 Post the Ardnish peninsula and Lochailort, I turned on to the A861 down to Glenuig, up and down some pretty tricky hills that got the legs going. As was becoming a constant for the west coast of Scotland the scenery was its usual good self.

I stopped for lunch at the Glenuig Inn, situated in a bay where the waters looked very inviting for a swim, however I still had around 30 miles to go and didn’t fancy being slightly damp and salty for that long, so I abstained. Really lovely area, with Rhododendrons flowering everywhere – I know they’re slightly evil and turn the soil acid but they look nice. Great lunch at the Inn, consisting of Kofta Kebabs and couscous, and a pint of something localish. The pub dog also said hello frequently – I think he was only interested in my kebabs though, they were very good. Glenuig would be a great place to stay for a few days, with plenty of walks, and kayaking available. 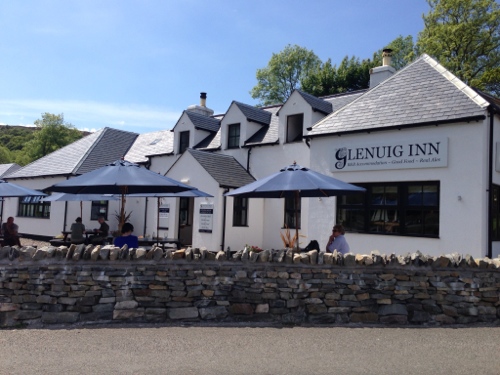 Post Glenuig I pedalled up a long climb south, over the top and down to Loch Moidart. I met a group of day-tripper cyclists at the top, all sweating profusely after their long climb which would become my glorious descent. It had turned very hot all of a sudden so I topped up on the sun cream, not wanting to get singed again.

The descent to Loch Moidart

I rode alongside the loch and past the seven men of Moidart, trees once planted to commemorate seven of Bonnie Prince Charlie’s faithful companions. The trees had to be replanted after they were blown down in 1988, and I wasn’t sure which ones they were, there being quite a lot of woodland about. There are quite a few references and historical information boards referencing the Jacobite uprising in the area, and to Clan MacDonald. I passed several local businesses bearing the MacDonald name.

The day grew hotter as I continued on along the A861, with no wind for a change and some large hills to contend with, meaning my water consumption soared. I wasn’t complaining about the nice weather though, long may it continue. Riding through some small villages, and around a bit of Loch Shiel, I made it over to Loch Sunart, turning right at Salen on to the the B8007.

Passing over a mountain river 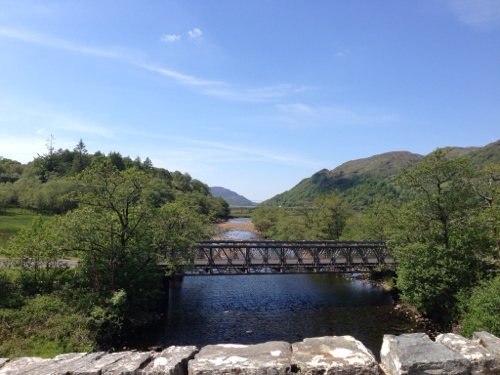 Standing on the old bridge looking at the new bridge 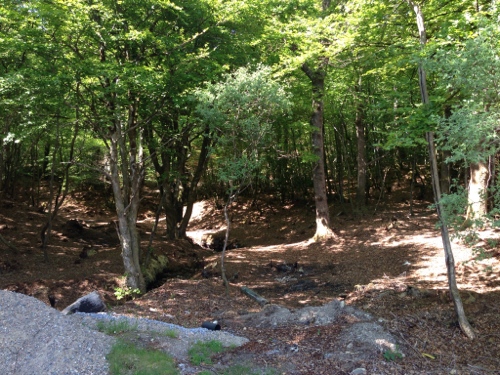 The ride alongside Loch Sunart to Kilchoan was through some fantastic scenery again, with lots of small bays, some of which had yachts moored up in them, or people kayaking and diving. It’s a pretty remote area so it wasn’t at all busy, with only mild traffic on the road going to or from Kilchoan and the ferry over to Mull. The road isn’t however very flat, in fact there aren’t really any flat bits to speak of as it constantly undulates with the occasional longer climb or descent. The road surface is also pretty rough in places so it turned into quite a hard ride, and I’d definitely need to check my spokes again later. It’s really hard to get into a rhythm without any consistency, so I started to tire fast.

I pedalled up to and through Glenborrodale, passing the castle and sizeable estate, as well as the lovely gardens. 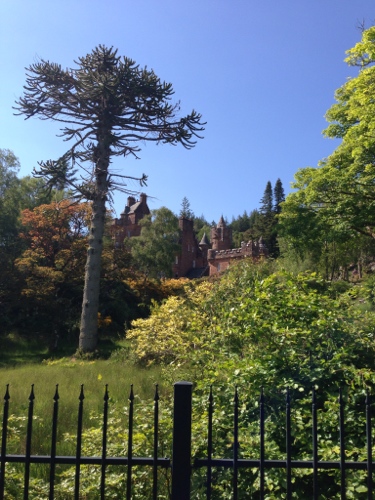 It looked like a private estate though, with lots of no trespassing signs, or trespasses enter at their own risk notices, which I took to mean you might encounter unfriendly livestock, or get shot at by an enthusiastic Laird.

Shortly after Glenborrodale I happened upon the Nadurra nature visitors centre, which had a cafe, the first I’d passed in miles and completely unexpected, so was a nice surprise. Feeling rather hot I was more than glad of a break, and bought an ice cream and cold drink to cool off with. A father and son on sleek road bikes had the same idea – the were complaining about the hills, I had little sympathy given comparative bike weights. The centre has various wildlife exhibits, including information on Scottish wild cats and all the bird life in the area – eagles could be seen apparently. I had a peer through the telescope they had set up but only spotted some sheep regarding me with suspicion, as well as a few geese, swallows darting about, and the odd raven.

Pressing on there followed a big climb around the impressive Ben Hiant, an extinct volcano covered in grassland and grazing sheep, who bleated in alarm at my passing. 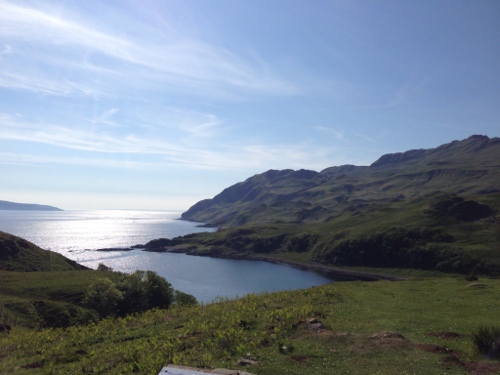 Riding up Ben Hiant and past Loch Mudle was pretty tough going on drained legs, and on the single track road I had a couple of close encounters with ferry traffic. Despite keeping an eye out I didn’t spot any eagles, which according to a sign in the Nadurra centre sometimes fly around the loch.

Other side of Ben Hiant

As a reward for my efforts there followed a lovely long descent into Kilchoan, down a winding road that was a lot of fun. I was able to throw caution to the wind a bit as I could see a long way into the distance, and there wasn’t any traffic on the road. I got up to a fair speed by the time I reached the bottom and had to start pedalling again, entering Kilchoan and stopping at the hotel for a pint. I watched a bit of the Grand Prix and chatted to the barman for a bit before continuing on.

It was too late to get the ferry over to Tobermory and Mull, which I wasn’t too upset about having knackered legs, so I rode to the Ardnamurchan campsite for the night. I hadn’t realised that Ardnamurchan Point is the western most point on the coast of Britain, it not being Land’s End as I once thought. I’d now done the Eastern, Northern, and Westernmost points. It couldn’t be more different to Lowestoft at Ardnamurchan, although I didn’t go all the way to the point (dead-end).

View across to Mull

The campsite is fairly rudimentary, but fine, and with wifi and a little shed area I could sit in to escape the midges, of which there were a plentiful supply. I had to treat my tent flaps like an air lock to try and keep them out. They were voracious in their appetites and even the Avon Lady wasn’t keeping them at bay.

Braving the midges I cooked up some couscous, a double portion, before retreating inside like everyone else on the site. The insect life in Scotland does at times impair a sociable atmosphere! Post a bit of journal writing and planning for tomorrow I hit the sack, looking forward to Mull, Tobermorry and Calgary Beach. I was wondering about visiting Staffa and Fingal’s Cave, however that would probably take a whole day out so I’d see when I got around to that area.

A good day, but I went to bed slightly aching, and itching.