I was beginning to think summer was already over, waking up to another overcast and slightly chilly day. I was also somewhat reluctant to get up due to feeling a little achy after a hard day yesterday. My left calf had a niggling injury that wouldn’t seem to go away, more irritating than anything else, and my right wrist felt battered after some long legs and bumping about a lot. My wrists had been suffering a bit lately due all the vibrations running through the bike into my arms, I probably hold on to the handlebars too tightly which doesn’t help. I’d have to keep an eye on both, and maybe investigate some strapping for my wrists if they got any worse, or ice, ice seems to solve most injuries, if you can get hold of some.

With the weather brightening up a bit I got the usual morning routine out of the way, and packed up, attaching the solar panel of my Power Monkey battery pack to the rear rack of my bike, to charge up as I pedalled along. Fingers crossed the sun would stay out. I wasn’t on the road until 10.30, having really wanted to start about an hour earlier, especially now I was covering longer distances each day. To get to London by 17 July I had to make sure I kept my daily average above 80 miles really, so a more disciplined morning routine was needed. It was going to be tricky, especially if I continued riding late into the evening.

Anglesey – ready for another day’s riding

I had about 15 miles left to do on Anglesey, which passed pretty uneventfully aside form lots of traffic on the road and nearly turning right to Aberfraw instead of left to Newborough. I took the south coast road to the Britannia Bridge, just west of the Menai Bridge which I’d crossed yesterday to get onto the island.

Crossing the Britannia Bridge – looking east toward the Menai Bridge

Once over the bridge I took a combination of minor roads and cycle paths to Caernarfon, alongside the Menai Strait. Caernarfon is another old walled own, with a big castle and marina. 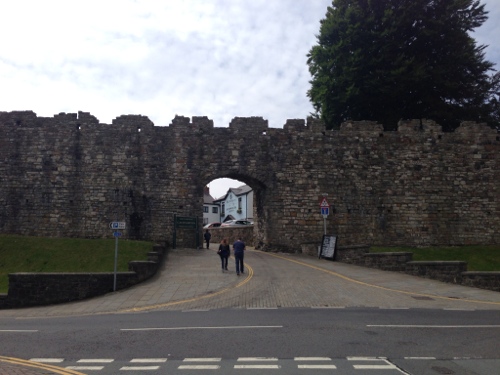 Caernarfon – town wall from the marina

The sun was coming out, providing a welcome bit of warmth, and with it getting on towards lunchtime I decided to stop for a bite to eat in one of the many cafes the town boasts. A great all day breakfast and decaf coffee set me up for tackling the Lleyn Peninsula, although you had to watch out for the seagulls.

The table next to me was occupied by a group of hungover lads on a stag do, one of whom was somewhat irritated when a seagull stole his sausage. Not a good result when you’re trying to get over the previous evenings libations.

Caernarfon – street running up to the castle

I had a bit of a cycle around Caernarfon, a Royal town with a rich history. The castle is another that was built by Edward I in his conquest of Wales, as he tried to keep control of the malcontent locals. 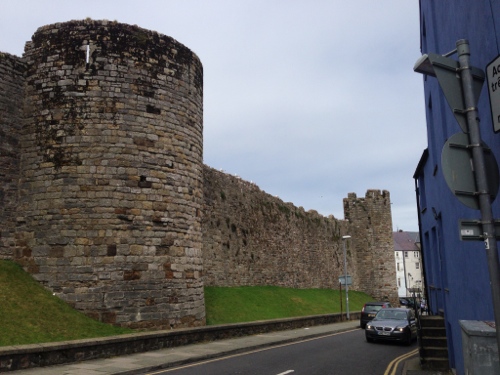 I had a quick scoot around the market, noticing a statue to Lloyd George, the Prime Minister during the First World War.

It was pretty packed with tourists so I was glad to make my way out of town, dodging buses and mobility scooters, as well as the usual unobservant pedestrians. There was a lovely old steam train about to set off down the Welsh Highland Railway, from just outside Caernarfon. 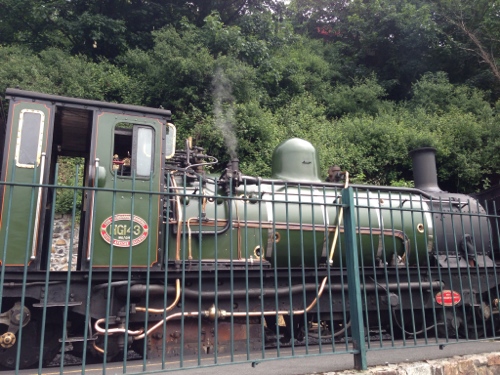 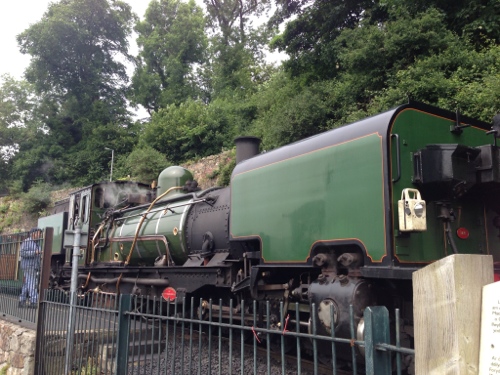 I was able to cycle alongside the railway on a Tarmac’d cycle path for several miles after Caernarfon, saying hello to a few other cyclists out on day trips. The cycle path runs from Caernarfon to Bryncir, with some great views into Snowdonia, however I needed to cut west to the Lleyn Peninsula so had to leave it before too long. I had a brief conversation with a guy on a recumbent, which never look very stable to me, but are pretty fast on the flat. Apparently they’re harder to get up hills though.

At Llandwrog I turned on to the A499, making good time along the flat road. I could see mountains looming in distance, with a thick bank of cloud hanging over the peninsula. It looked like it was going to be a tough afternoon. 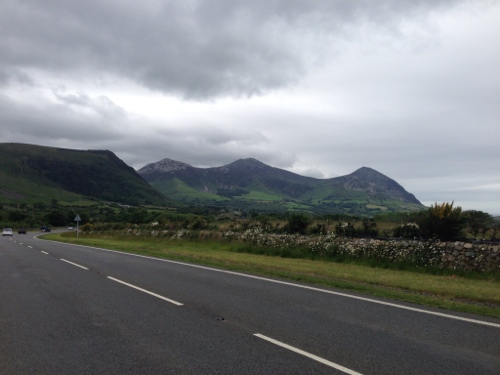 Mountains and clouds building up

Sure enough there followed some pretty vigorous hill climbs over to Nefyn, through some pretty dramatic scenery. Thankfully it remained dry, although a bit of rain might have helped bring down the pollen count which was making my eyes itch. There’s not a lot you can do with itchy eyes when you’re out in the middle of lots of grassland, other than load up on anti-histamine and try not to rub them. At times I felt like extracting my eyeballs and giving them a thorough wash, the pollen count must have been really high.

Mountains of the Lleyn Peninsula

I continued down the Lleyn Peninsula, with sheep regarding me balefully from the fields. At least they weren’t occupying the roads, yet, but I’d learnt to distrust the blighters so kept a careful eye out; they can ambush you quite unexpectedly.

The Welsh seemed to have built their roads to go up and over every available hill in the area, rather than on the nice flat farmland, which incidentally was mostly occupied by sheep. Fine if you’re in a car but tiring on a bike after the first few climbs. I did however make it Aberdaron, which was the furthest west I was going on the peninsula. The road to the end was tempting, the Lleyn peninsula being a wild and beautiful place, but it was a dead end, involved another big hill, and the weather was looking like it was going to close in.

I stopped for a rejuvenating bottle of Bud in Aberdaron, to try and raise morale which had been teetering a bit all day. Wales had not been too kind so far, with some pretty bad weather, tough riding and busy roads. The Lleyn Peninsula provided a break from busy roads, but I was missing the friendlier faces I seemed to have encountered more of in Scotland.

I took the minor road back east from Aberdaron, along the south coast, up and over more big hills that were shrouded in low cloud, lending a damp atmosphere to the proceedings. 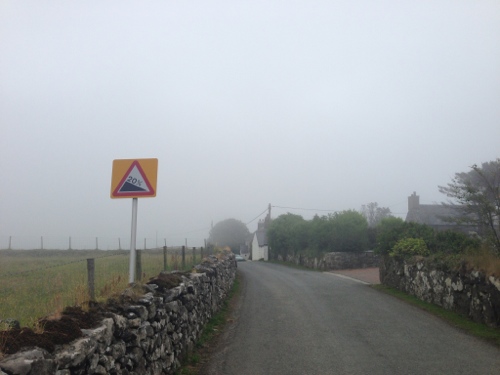 Steep and foggy hills out of Aberdaron

It was a little bit eerie cycling though the fog, with sounds distorted and limited vision. I could well imagine giants looming out of murk, hunting for a rogue Englishmen on a bicycle, and chanting ‘Fee Fi Fo Fum, I smell the blood of an Englishman, Be he live, or be he dead, I’ll grind his bones to make my bread’. They’d probably be chanting in Welsh though, which seems to be predominantly spoken in the area, especially in the presence of anyone obviously English.

Thankfully no giants were forthcoming and I passed through Llanbedrog on my way to Pwllheli, joining the A497. I passed a few very tempting looking pubs, with lots of people just going out for Saturday night. I very nearly stopped for a pint, however that would have been dangerous leading perhaps to several pints by this stage. I was starting to feel pretty tired and still had low spirits, but had a way to go before I could stop for the day. At least the wind was behind me which helped speed me along on the next stretch.

The road to Porthmadog was more enjoyable as I sped along the coast through Criccieth, passing gaggles of young ladies out for the evening, some of whom offered encouraging remarks – helped boost morale! I made good time on the flat, smooth and wide road, untroubled by traffic, and was in Porthmadog by 19.30.

I’d originally planned to stop in Porthmadog, but it looked fairly uninspiring so I rode straight through it, and out alongside the railway line. There are lots of campsites along the Welsh coast so I had my fingers crossed I’d find one, but if not I could ride late and find somewhere remote to pitch up for the night. As long as I set off early in the morning I’d be unlikely to bother anyone.

View from cycle path alongside the Britannia Terrace from Porthmadog

Looking inland and north towards Snowdonia

I passed through Minnfford, where I was heckled in a not so encouraging fashion by some local kids, and stopped to look at the signpost to Portmerion where the Prisoner was filmed.

I didn’t see any large rubber balls attempting to herd me into the village, so pedalled on quickly, crossing the toll bridge over the river, the Afon Dwyryd. If it hadn’t been open I’d have had to pedal all the way inland to Maentwrog, before turning back down the other side of the river towards Harlech. The bridge probably saved me about 8 miles and several hills, which would have about finished me off today. 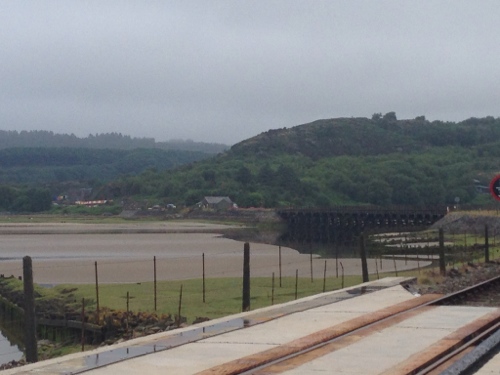 After crossing the river the scenery improved, with more trees lining the steep hills alongside the road. I found a campsite just down from the toll bridge, before getting to Harlech. It was a lovely quiet spot which was just what I needed by this point, with only a handful of other people on site. The owner was very friendly with a lovely sing-song welsh accent, who instilled a new enthusiasm in me for exploring more of the Welsh countryside; his passion for it was infective.

I was able to recharge my phone in the laundry room, which was handy given the lack of sunshine for most of the day which meant my solar charger hadn’t done a lot. 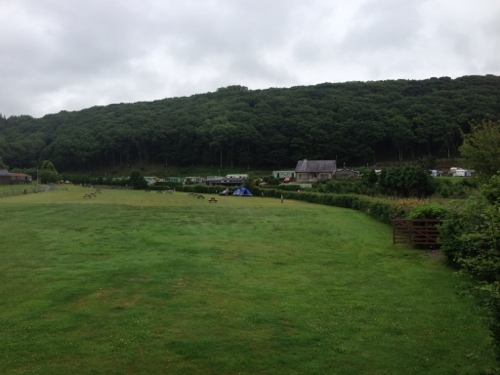 After a shower I settled down to a feast of bread, BBQ’d chicken, crisps, tomatoes, and a whole packet of Cadburys mini rolls for dessert. With my mood considerably improved I caught up on a bit of writing, before turning in for an early night. I’d covered 90.5 miles today, a good result all things considered, and wanted to get an earlier start tomorrow to head down towards Cardigan. I wasn’t sure if I’d make it all the way to Cardigan, it was a long way and I suspected there were some fierce hills in the way. Hopefully the weather would be better whatever the terrain was like.

I fell asleep pretty quickly and deeply, dreaming of foggy roads and giants. At least those pesky sheep hadn’t managed to infiltrate my slumbering thoughts as yet, hopefully the giants would eat them if they did, although they’re probably in league with each other.