I didn’t get the best night’s sleep thanks to dogs barking and howling in the nearby kennels, which kept me awake for a bit and sounded slightly eerie when they all starting howling en-mass. It was already pretty hot again by the time I woke up, so slightly grumpy I quickly rolled out of my tent, keen to get on the road to Colchester. 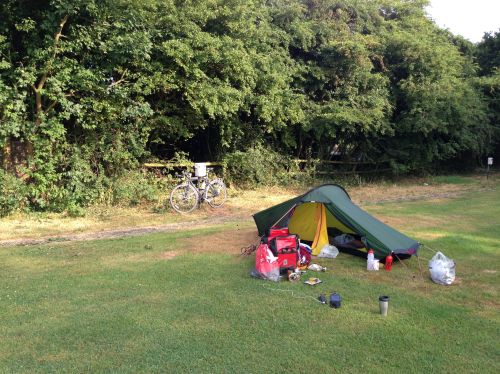 I consumed a big breakfast, finishing off the bread, ham and cheese from last night, as well as a big pot of yoghurt; I figured I’d probably skip lunch today. Whilst eating I watched a women putting her border collie through it’s paces on an obstacle course in the field next door. They looked pretty proficient, and the dog was obviously having a great time, ears ever alert to instructions from its mistress.

Bike loaded I was on the road by 10.00, with the temperature already in the mid 20’s. First up I cycled down to the coast via Leigh-on-Sea, and continued around to Southend-on-Sea. Unfortunately the promenade alongside Southend beach was a bit grotty, with a few people already the worse for wear for drink; a shame when it’s not even 11.00 and they’re alongside kids playing on the beach. 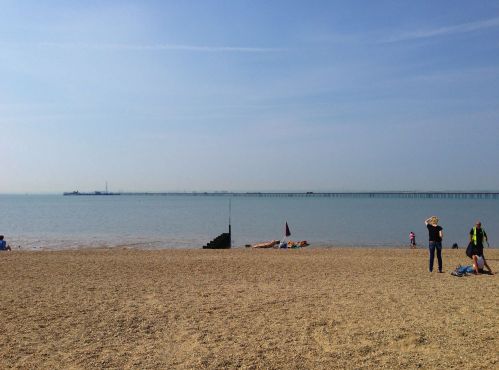 There were already quite a lot of people on the beach, having a good time in the sunshine, but the coast here has nothing on the coast in the West Country or Scotland. It’s always nice to have the sea on your doorstep though, and I expect a lot of locals make good use of the beach and it’s amenities.

I was already getting through my water bottles as I rode along to Shoeburyness, saying hello to a few other cyclists out riding along the seafront. I turned north to Great Wakering, riding past Foulness Island which wasn’t on my list of places to visit; it looked a bit flat and dull but is no doubt a haven for bird watchers.

Idling down country roads enjoying the gorgeous weather, I pedalled west to Rochford, crossing the bridge over the River Roach.

Bridge over the River Roach

I rode up to Canewdow and the Essex Marina, through flat fen like countryside, hoping to get the ferry to Burnham-on-Crouch over the River Crouch. A slight Easterly breeze helped keep me cool, however I was still glad of a break by the time I got to the marina, by which time I had finished off one water bottle and started on the next. I wheeled my heavy bike on to the ferry pontoon thinking it all looked a bit quiet, and tried ringing the number advertised; there was no answer, and unlike the Helford River crossing there was no handy disk to summon the boat. Luckily a yachtsman noticed me waiting and hailed me to say that the ferry didn’t run on a Wednesday, which is pretty inconvenient when you’ve just cycled several miles to get to it. I’d also been quite looking forward to seeing Burnham-on-Crouch, a big yachting centre. Having been in a lot more remote parts of the country where the ferry boats run 7 days a week, I found this quite strange.

Slightly annoyed at somehow having missed the fact the ferry didn’t run on the one day of the week I’d chosen to visit, I was forced to push my bike off the pontoon and retrace some of my route towards Ashingdon, alongside the River Crouch and looking for a place to cross. A bridge didn’t materialise for several miles, not until Battlesbridge where I crossed and pedalled on towards South Woodham Ferrers.

Unfortunately in my haste to get on, having not been able to make use of the ferry, I took a wrong turning and ended up on a minor road alongside the A130, cycling towards Chelmsford. I blame a new roundabout which may have been built after the map I was using was published, that’s my excuse anyway. I realised my error after a few miles, and a few unanticipated hills, when I ended up in Howe Green not far from the A12; that’ll teach me to zone out whilst cycling.

I turned east to rectify my navigational error, passing through East Hanningfield, Bicknacre, and several butts; road names which no doubt reference the obligation in past centuries for people to partake of archery practice. Despite being slightly frustrated at having added on a not inconsiderable number of miles to what should have been a short leg, it was nice riding through the Essex countryside, and a bit different to be away from the coast.

Maldon was next on my route, a nice looking town where I stopped to buy a cold drink, downing a pint of milk to refuel and stashing a bottle of Fanta for later. There were lots of very ‘Essex’ looking people around. I don’t mean to stereotype but every other person seemed to be slightly on the orange side due to fake tans, with expensive looking hairdos, and a fair amount of suspect looking cosmetic surgery. I was looking pretty manky and disreputable by this stage of the tour, so didn’t hang about for too long, only stopping to chat to a man with a prosthetic leg who was trying to escape from a couple of Mormons.

Back on track I decided to head straight for Colchester, so took the B1026 to Heybridge, then up to Goldhanger which got me singing the theme tune from Goldfinger, followed by a run of other random tunes as I cycled down more pleasant country roads. I rode through Tolleshunt D’Arcy attracting a few odd looks from pedestrians due to my vocal efforts; maybe I had a bit of sunstroke. Wigborough came and went, as did several other villages with bizarre sounding names. I think the villages must have pretty mixed origins, with Saxon mingled with Norman and a bit of Norse.

After crossing the bridge over the Abberton Reservoir, and having run out of water, it thankfully wasn’t too much further to Colchester. I passed through Layer-de-la-Haye, another strange sounding place which I later looked up. I was correct in my assumption that Saxon, Norse and Normans all had their part in place names in the area. The village was founded in Saxon times, when it was known as Legra meaning lookout, then changed it’s name to Leire or Leger, meaning mud, a Norse word referring to the marshland surrounding the village. Finally the village came into the possession of the de la Hayes during the Norman conquest, and its name changed to Layer-de-la-Haye. With the land around here having changed hands so much over the last 2,000 years there’s no wonder there are a few odd sounding places around.

It felt like the hottest day of the tour so far, with the temperature well into the 30’s, so I was glad to make to Colchester where I found the Camping and Caravanning Park fairly easily, in Lexden. I had to call the warden to book in as reception was closed, and a queue of confused looking tourers in cars were waiting outside; 2 Germans and some Italians I think. No-one else had called him and he looked slightly alarmed at the number of unexpected visitors when he finally appeared. Having taken the initiative I booked in first, keen keen to get into the shade.

Cooling off in Colchester post a hot day’s riding

Having pitched up relatively early I had a little time on my hands, so I got set up and then headed to a nearby supermarket to stand in their freezer isle for a bit; this was becoming a habit, but was utter bliss. I also bought a few supplies including dinner, and a few bits and pieces for Latitude. I probably bought far too much considering I didn’t have much appetite due to the heat, but figured I’d eat it over the next few days, and the Latitude van would transport my panniers to the festival anyway. It would be very strange riding on a much lighter bike, a treat I was giving myself as the leg tomorrow wasn’t part of my coastal tour.

I spent the evening at the campsite over a couple of beers,checking my bike over and trying to stop my rear brake pads from squealing so much. I adjusted them so they weren’t quite as noisy, however I’d need to change them for new ones after Latitude.

I rang my brother Will to see how he and more importantly his wife were getting on in the heat. They were expecting child number 2 in a few days time, and I think Louisa was feeling pretty uncomfortable by this stage. They were having a sweep stake as to the sex, weight and day of birth, so I went for Tuesday at 11.45, a girl, and 7’3″; I only got one thing right – the gender.

The Colchester start for the Tour de Latitude, which I was due to join tomorrow morning, kicked off from just outside the city. The starting point was only a few miles from the campsite so it would be easy to get to. I was looking forward to meeting Nigel, Wayne and Mel at the festival, and basically lying in the grass for a few days listening to bands and drinking beer. If the weather stayed like this it was going to be great.

There were a lot of foreign tourers at the campsite for the evening, including a few fellow cyclists. One pair of Dutchmen were travelling on recumbents, which always look a bit scary to me being a lot lower to the ground, but I’m still keen to try one out at some point. The flood of late arrivals kept me entertained for a bit, as I watched people struggling to put up tents in the dark – I did offer to help incidentally! I was hoping the mosquitoes might visit them instead of me tonight, having been bitten quite profusely the night before.

I caught up on my journal for a bit, and checked out how Captain Ketch (James Ketchell) was doing on his round the world cycle tour – check out his website at http://www.jamesketchell.net – he’s done and is doing lots of cool stuff. It makes me want to pedal off around the world too, and I might just have to one of these days.

I’d covered 73 miles today, further than anticipated due to a few unplanned diversions, however I only had about 60 miles to do tomorrow, and then had three days off at Latitude; I couldn’t wait.