I was up early in anticipation of Latitude, and joining the Tour de Latitude from a few miles down the road. A big breakfast of baguette, pâté and other leftovers quickly disappeared, and I decided to give away a couple of large pots of yoghurt rather than risk them bursting in my panniers; something I’d experienced previously and had to spend ages cleaning up. The French tourers I gave them to were happy recipients and wished me well on the rest of my tour. 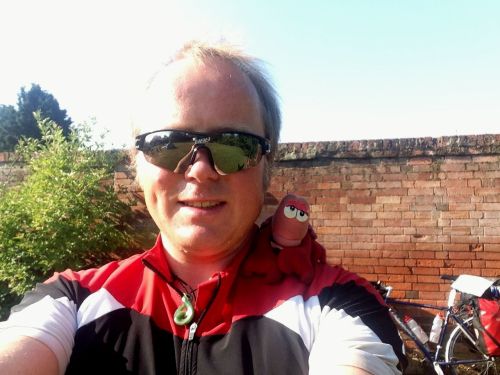 Lobster and I ready to hit the road to Latitude

In high spirits I packed up quickly and rode the few miles to the Cricketer’s Rest in Fordham Heath, near Eight Ash Green, arriving a little early, however some of the Latitude Tour crew were already setting up. I registered and unloaded my panniers into the van, leaving just my tent and bar bag on the Ridgeback. It felt a lot lighter and unaccustomed to the lack of luggage I was a bit wobbly as I tested out my streamlined bike.

Once registered I chatted to other ‘Tour de Latitude’ participants as they arrived, and we were ready to go by about 10.00. I munched my way through a second breakfast courtesy of Marks & Spencer who sponsor the tour, and provide food and refreshments along the way. There were 30 to 40 of us leaving from the Colchester start point, with other start points in London, where they’d already be on the road, and Ipswich where they’d start a bit later. People wanting to take part have to raise a minimum of £150 for charity, and get a free ticket upgrade to the guest camp which has better facilities, and you have more of a chance of bumping into other interesting guests. They raised over £7,000 for the Great Ormond Street Hospital Children’s Charity this year – read more here – /www.latitudefestival.com/news/why-not-travel-first-class-bike-tour-de-latitude

Motorbike Marshals – they accompanied us along the route

Whilst waiting to start I bumped into Jack whose rear wheel looked like it had seen better days, with several loose spokes and a challenging buckle to work out. Using my spoke tool I tightened up the spokes and managed to get rid of the worst of the buckle, sufficient for the days ride anyway. We were in the first group to leave, which included all manner of cyclists, from those on super light road bikes with all the kit, to those on more ‘robust’ machines in appropriate festival attire.

The group quickly spread out as we each found our own pace, joining up with others riding at a similar speed. I ended up riding with Jack as we sped through the Essex countryside down quiet country lanes. Jack’s in his early 20’s, and I was a little concerned he’d outpace me early on, however days of being on the road had obviously had their effect and I was able to match his speed, and was more used to riding longer distances. It only took 1.5 hours to reach the Ipswich stop point, having followed a clearly signposted route which the organisers had put up, and being shepherded along by the motorbike marshals who helped keep us safe as we rode quickly through road junctions. It was superb weather again, and nice to be riding with a group for a change.

We were able to take advantage of more M&S snacks at the Ipswich break point, where others were just starting their ride to Latitude. I had a quick chat with Beth, the Tour de Latitude organiser, suggesting that next year a similar ride could be set up from Norwich. I’ll have to remember to suggest it again nearer the time as there must be a lot of cyclists who’d be up for it, and I’m sure Pedal Revolution or one of the other local bike shops would support it.

Refuelled we continued around the outskirts of Ipswich and through the lovely Suffolk countryside, passing fields full of ripening corn. Everything, aside from perhaps me, smelt fresh and summery. Jack was suffering from a bit of cramp, having not cycled this far before, however he was doing well and had a very high baseline fitness due to his footballing activities. He’s starting a career in marketing, and it got me thinking about when I’d just left University and started my own career at Virgin Money. I don’t think I ever foresaw myself working in the banking industry as a long term job, but it’s worked out alright; not all bankers are bad incidentally!

It was another really hot day, which wasn’t helping with Jack’s cramp and meant we were getting through water very quickly. The last few miles seemed to go on for a long time, as we passed others who had started in Ipswich and were also starting to wilt in the heat. We arrived at Henham Park, site of the Latitude festival, at about 14.30, and discovered we’d come 3rd and 4th respectively, covering 60 miles in about 4.5 hours. I was pretty impressed with our time, and it demonstrated how much quicker you can ride in a group, and of course when you’re not carrying so much luggage.

More refreshments were available for us at the finish line, including lots of very welcome cold drinks. I collected my panniers and Jack dropped off his bike, which they’d take back to Colchester for him; very impressed with how the tour is organised, and will definitely do it again, hopefully for Norwich.

After more snacks and a cold cider I thanked and bid goodbye to Jack and the organisers, including Laura Pando who’d sorted me out with my tickets; what a lovely lady! I needed to cycle back out of the festival and around the outside of Henham Park to the guest car park to meet up with Nigel, and sort out his ticket. It was fantastic to meet up, and he supplied me with another cold cider which he hadn’t realised was 8.4%; things were getting off to a good start.

We obtained our guest wrist bands and headed over to meet up with Wayne and Mel, me on my bike again, and Nigel going round in his car. We’d decided to all camp together in the main camping area, rather than use the guest camping area. The site was already pretty packed but we found a space where we could all set out tents up. My small Hilleberg Akto was dwarfed by everyone else’s, and could have easily fitted inside Nigel’s. His tent was handy for storing my bike in, out of sight from any potential thieves.

All ready to go at Latitude, 5,000 odd miles had squashed my hat

Setting up the tents didn’t take long and it was soon Pimms o’clock, followed shortly by cider o’clock again. It was pretty clear how this weekend was going to progress, and the alcohol was doing wonders for improving the state of my legs and general well being after 62 hot miles, pedalling through Essex and Suffolk.

There follows a summary of Latitude, with a few pictures.

Latitude – flowers in the woods

Sunshine over the lake at Latitude

Lady under the moon 1

Lady under the moon 2

Lady under the moon 3

Lady under the moon 4

Wayne and Nigel – makes me chuckle every time

Chilling out in the grass

Lobster with the Pimms, he’d earned it

Random accidental photo of me that worked out quite well

In the Far Away Forest

Richard Ashcroft – he was very good

Cool paintings in the woods

Cool paintings in the woods – really like this one

Monday morning came all too quickly, and it was time to pack up and get back on the road for the final few legs home. My tent pole fix had lasted through the night, and I was remarkably not hungover considering the number of pints we’d partaken of on Sunday.

The camping area at Latitude looked like a bit of a bomb site, with abandoned tents and rubbish strewn all over the place. Our area was at least clean; I don’t really get why people can’t tidy up as they go along, rather than leave it someone else to clean up after them.

I grabbed a quick shower to wash off the dust from yesterday, which was refreshingly cold as the gas had run out, then packed up and big goodbye to Nigel, Wayne and Mel. I was back on the road by 10.00, after grabbing some free Lucozade being handed out at the exit. It had been a great festival.

Unfortunately cycling out of Henham Park proved to be somewhat of a trial, on the narrow track with lots of traffic. Dust was being kicked up by all the cars, covering me in grime again, and I couldn’t really squeeze past the queue. I also got attacked by mosquitoes where the track passes through woodland, and must have looked a bit odd frantically squatting them away. Shortly afterwards the track opened up a bit and I was able to whiz past the slowly moving traffic to the main road. It helped that it was dry so there wasn’t any mud to contend with, unlike a couple of years ago when it took us hours to get out.

The A12 followed, with the Latitude marshals doing a good job of keeping the traffic moving. The ride to Ipswich was pretty straightforward, through Saxmundam and Woodbridge. I tried to avoid the A12 as much as possible, taking country roads that seemed to be going in the right direction.

In Ipswich I stopped off at Elmy Cycles to get some new brake pads, and Cotswold’s kindly performed a better fix on my tent pole, re-threading the elastic and binding it up so it would last until I got home. They were really helpful and didn’t charge for the fix, so I donated a few quid to their charity instead. I’ll need to order a new pole before my next long tour; maybe Hilleberg will send me a new one for free if I ask nicely.

After a nice Subway sandwich I called my brother to check on new baby status; there was no news as yet but the Royal birth was imminent, and indeed later that day Prince George was born.

It was a good day to be cycling, and definitely cooler on the bike than off it, pedalling down to Brightlingsea. The breeze was refreshing, and the route mostly flat as I rode back into Essex and down to the coast, arriving at the campsite after covering 61 miles. It was a bit of a rip off at £20 for the night, but was a site next to a lake and not far from the town centre.

The last few legs were going to be shorter as the tour wound down, and I intended to make the most of the final few days on the road and fantastic weather. I was still mulling over ideas for the next tour, having not been deterred by this one, and was considering a ride up to the Arctic Circle via Amsterdam, Denmark, Sweden and Norway.

I did some washing, clothes drying very quickly in the heat, then went out for dinner at the Brewers Arms in Brightlingsea. I felt too tired to cook after the exuberance of Latitude. and my fuel bottle had gone walkabout at the festival anyway. I chatted with a group of blokes sailing their boat down the coast, which sounded like a great thing to do given the conditions.

Dinner a the Brewers Arms, Brightlingsea

I’d covered 5,284 miles by this point of the tour, and was planning to be back in Norwich on Thursday; for some reason this was a bit of a scary prospect.