I awoke to a cold and windy morning post a good night’s sleep. It wasn’t raining although precipitation was forecast for later on, whether that be rain, hail or sleet remained to be seen. Breakfasted on oatcakes and cheese, berocca substitute and fruit, and felt set for the day. Oatcakes are a good find as they fit in my panniers easily in their individual packets, and contain plenty of the right sort of carbs, and cheese is always a win.

With the weather looking like it was going to do much the same as yesterday I packed up my thankfully dry tent, stuffed kit in my panniers, and was on the road by 10am. I’m definitely getting into a routine on this, and getting more efficient at what goes where and keeping things organised. It’s really annoying if you can’t remember which pannier you’ve put something in when you need it in a hurry, and you end up going through them all until you find what you want. 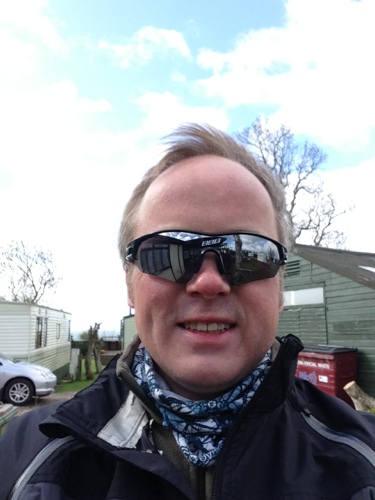 Ready to go, bit windy though

Taking advantage of a tailwind I made good progress along the coast, through Elie, St. Monans, and on to Anstruther where it started raining, just a shower and already had my waterproof on.

The showers were to continue on throughout the morning and into the early afternoon, and the temperature really drops when they pass through so had to pedal vigorously! A lot of the coastal towns and villages I pedalled through reminded me of those down in Cornwall where we used to go on hols when I was a child. They’re stuck on to the coastline, with neat little harbours for fishing boats, a church, cottages and of course at least one pub. I guess the towns around here sprung up on similar sorts of enterprises to those in the south west; fishing, farming or mining.

I pedalled on to Crail where I took a diversion out to the point – Fife Ness, where there’s yet another golf club. I wanted to see the point but regretted it slightly when I had to ride back to the route into a fierce headwind. 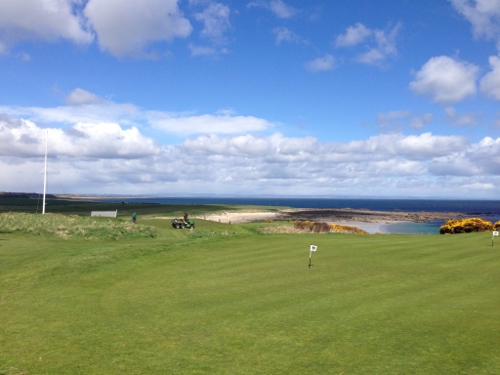 Feeling peckish I got back on to the A917 and continued around to St. Andrews, into a partial headwind and at times driving rain that came lashing down with a vengeance. Could have sworn there was a bit of hail mixed with it too as it left my face stinging. I arrived in St. Andrews as the sun came out, and had a quick scout around, immediately liking the town. Nipped into Boots and bought some vaseline, with Aloe Vera (well posh), for my lips and nose which were suffering slightly from the adverse weather. Also bought a few provisions from Sainsburys, using a £2 brand match voucher that was about to go out of date. For those organised people this won’t sound like much of an achievement, however remembering to use supermarket vouchers is a big thing for me, so was quite chuffed with my savings!

Lots of students and tourists in St. Andrews giving it a good atmosphere. One busker playing an accordion, very well, no goblin tendencies as far as I could tell.

I found a lovely cafe for lunch and proceeded to spend the next couple of hours there. Jannettas is a great little establishment, serving reasonably priced and wholesome food.

As they had wifi I also caught up on my blog, but had to finally drag myself away to get to my campsite in reasonable time.

I noticed St. Andrews has a Gold Gilt award. I’d been seeing these awards as I made my way around the coast in various towns and villages, but only seen bronze and silver to date. I assume they’re to do with general attractiveness of the town, tourist appeal, tidiness etc. Gold definitely deserved for St. Andrews, even if it’s just because of the lack of goblins or trolls.

On my way out I cycled past the cathedral, destroyed in the reformation, and the castle, destroyed in the independence wars and apparently the site of various burnings at the stake and murders. A prominent Protestant was killed there, then his mates all got together and killed the catholic Cardinal (Beaton, who had a mistress, is that catholic?), and set up their own Protestant parish. There were various sieges and French assaults as well, all very dramatic and I imagine you can get a far better account on Wikipedia. Few pictures below. 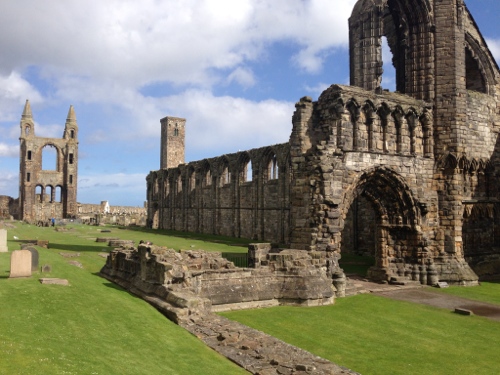 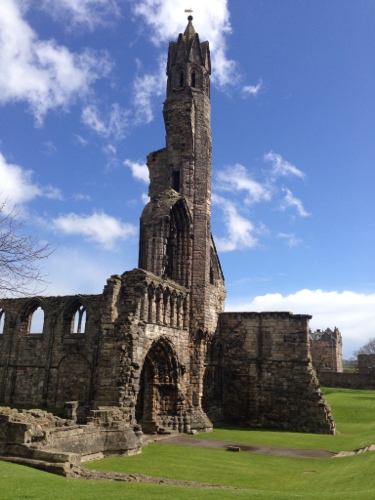 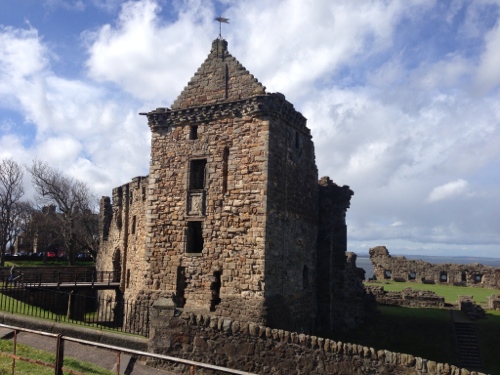 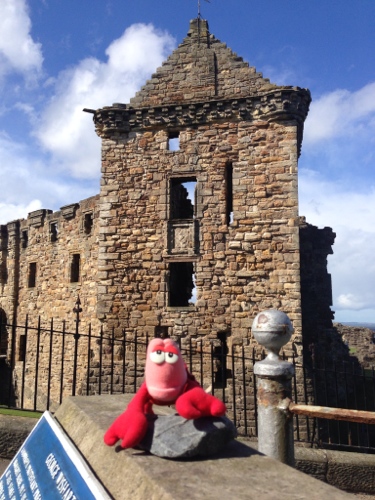 Cycled around a bit more of St. Andrews, including the golf course seeing as it’s a famous one – road all the way down to the estuary and view point, seeing a few jets take off from RAF Leuchars, and back again enjoying the sunshine. Then watched a few people teeing off from the prodigious clubhouse which has words such as ‘ancient’ in its title, must be posh. Wasn’t so impressed when a bloke in his Chelsea tractor nearly flattened when he turned out of their car park whilst on his mobile phone though. 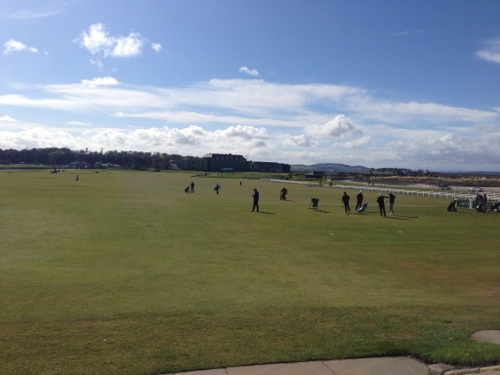 Note sunshine out, a rarity.

Leaving St. Andrews via a nice cycle path running alongside the A91, I cycled on to Guardbridge and over the River Eden, watching more Euro Fighters play cat and mouse in the sky overhead. Rode past the RAF base where my Dad was once stationed (a few years ago now ;)) and on to Tentsmuir Forest where I wanted to spend the night wild camping. It was a really nice ride through the forest and down to the beach where the sun was still shining, clouds and rain over St. Andrews now but it was going out to sea so I was saved another soaking. Apparently Dad used to get chucked into the sea off the coast here, for Air Sea Rescue drills, looked abut chilly for that sort of activity to me. 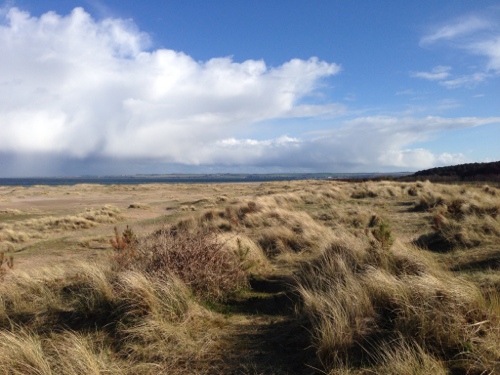 Making my way through the forest I collected some birch bark for at experiment later (doesn’t harm the tree). Nice ride down good trails, smoother than some of the roads I’d been on! I stopped just past Tentsmuir Point at a landmark called the Ice House, which is a perfect place to camp. Didn’t see another soul for the rest of the evening. 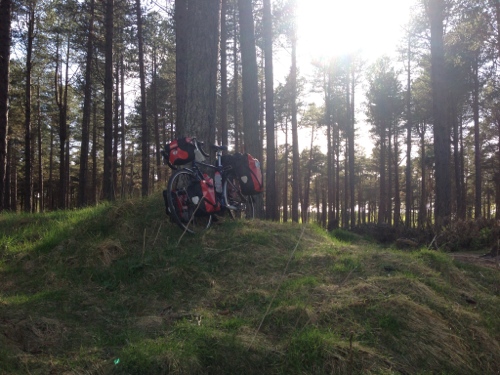 The Ice House was built in 1858, or thereabouts, and was used to store salmon caught in the area, using ice saved from winter. It’s derelict now but home to a colony of Natterer Bats I hoped to see later. Was slightly concerned it might also be home to trolls, and whilst I’ve watched troll hunter I’d forgotten my UV light kit.

Tentsmuir Forest has been home to people for thousands of years, from the Mesolithic period through to the Picts, Romans, Vikings and beyond. A group of sailors, Dutch I think, got shipwrecked of the coast here and set up home, initially in tents, which is where it’s current name came from (Tents Moor). Poles were stationed here in the second world war and built tank traps and bunkers. Then the forestry commission bought it and planted pines. Interesting nature reserve along the dunes with cool species of plants and animals, where you can learn about succession if you’re that way inclined, took me back to biology field trips.

I had a cold supper eating provisions bought from St. Andrews, accompanied by a hot cup of peppermint tea. It stays light a lot longer up here, compared with Norfolk anyway, so although chilly enjoyed a nice peaceful evening in the forest, about 200 yards from the dunes and sea.

I wanted to experiment with trying to light a fire using only flint and steel, which is why I collected the Birch bark earlier. Found and sandy hole and after a few minutes had success. Silver Birch bark makes the best tinder, at least in the UK. 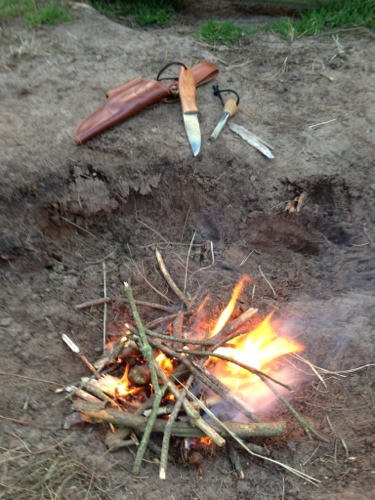 The forestry commission don’t like fires in or near their woods so I quickly put it out, and made sure it was out. Shame as it was a chilly evening, and could have been handy if anyway unwelcome guests of a trollish nature turned up.

Had an early ish night after waiting up to see the bats, they didn’t appear, making me wonder if there were indeed trolls in the ice house.

Only did about 47 miles today, but nice to have a slower day and have a couple of big legs coming up.