Quite a frantic weekend but managed to get some cycle training in, with a trip down to Bungay and back via several intriguing country roads that didn’t necessarily go where the map said they did, or rather where my Garmin thought they did. In fact I didn’t really end up going the planned route at all on the way back, but it still worked.

Bungay was confusing. I went around a few roundabouts several times, and took a few wrong turns, plus got caught in a one way loop exacerbated by road closures due to a running event. It didn’t seem to matter which way I went, even after I was miles from Bungay on the way home my sat nav kept trying to direct me back there; think there must be something insidious residing in the town, or maybe underneath it, perhaps Lovecraftian in nature, that screws with your navigation devices. Knew I shouldn’t have ventured into Suffolk 😉 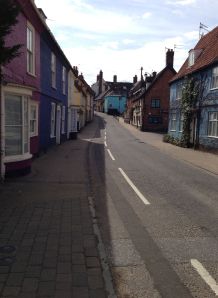 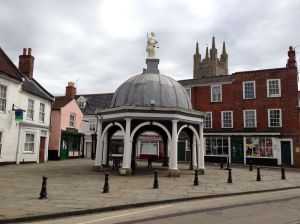 There used to be a roundabout just outside the town that was home to chickens, just roaming free on their island oasis. Sadly they seem to have all disappeared now but would like to know what became of them. I hope it wasn’t a health and safety issue, and hopefully they didn’t all end up as take-away dinners.

My bike was fully loaded today, including tent on the back rack, and felt heavy especially when cycling into a strong headwind. You really have to adjust your cycling style with a heavier bike, it doesn’t stop as quickly, in fact the brakes take a lot longer to work when travelling downhill at any speed as I did a few times today (Norfolk really isn’t that flat despite rumours to the contrary). The bike also doesn’t corner quite as well and I had to give myself more time to change direction, which resulted in a few close calls with hedges and curbs. 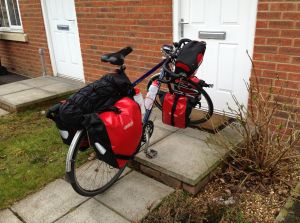 I recorded a video during a downhill stretch that got a little ‘exciting’ due to the one-handed nature of my descent, and lack of efficient breaking. Had quite an ‘interesting’ encounter with a speed bump at the bottom of the hill. If I can work out how to compress the video a bit I’ll stick it up. It ends quite abruptly due to aforesaid speed bump.

Spring definitely sprang today with temperatures soaring to around 17 degrees C, lovely to see lots of daffodils out along the roadside, although not sure what this chap was doing loitering next to them. 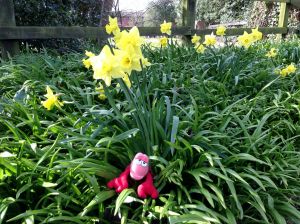 Also managed to squeeze in a quick pint at the pub in Woods End, which has re-opened under new management and is pretty swanky now, will have to go there for a meal at some point. 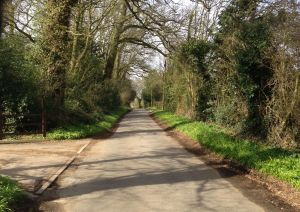 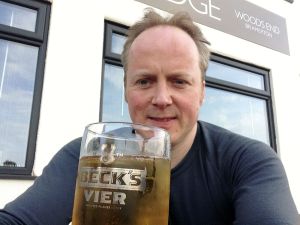 Made it back to Norwich after a circa 50 miles round trip. Will be doing longer on a day-to-day basis once I start the tour, but today was more about testing the bike fully loaded, and making sure my knee held up. Thankfully both worked.

Other news from the weekend; lost at poker but nothing new there (can’t seem to play anymore), back fence fixed, again, but hopefully will stay upright for another few years now. Feisty Kendo session which resulted in a few bruises after some excellent fencing (not the same as the garden fence I had to fix), curry and a few pints in the Fat Cat was a good recovery session. Also had an interview and photos taken by the local newspaper, so should be in the Norwich Evening News tomorrow, and perhaps the EDP later in the week, which will help with publicity and sponsorship.

All in all great weekend. Think I’ll go an chill with my guitar for a bit now before another hectic work week starts. Roll on 01 May!