After a sound night’s sleep courtesy of Lynne and John, woke up feeling a little dehydrated. Think I need to make sure I drink enough even when it’s cold and I’m not sweating much. It was a beautiful morning with bright sunshine and only the odd fluffy white cloud, however the forecast was for rain later. It often seems to do this in Northumbria, starts off lovely then deteriorates as the day goes on. I made sure I had my waterproof handy after jinxing the weather by applying sun cream.

After a superb and hearty breakfast (full English) I bid goodbye to John, Lynne having left for the office early, thanks again for putting me up guys, recommend no.28 for all touring cyclists! First I cycled back up the hill for a quick look at Warkworth Castle, the first of many I was to see today.

I then headed back through Warkworth and over the bridge, turning right on to route 1, intending to follow it for a bit before turning inland to visit Alnwick, a short detour down memory lane and to restock with supplies. Reached it in good time after a couple of invigorating hill climbs, and stopped in at Barter Books, the UK’s biggest second hand bookshop and well worth a nosy around. Unfortunately I had no spare room in my panniers, could have spent hours there looking over the dusty shelves of venerable tomes and interesting books of all genres.  Feel certain there must be a few magic grimoires hidden amongst the collection, some scenes from the Harry Potter films having been filmed in Alnwick.

I meandered around the town some more and past the castle, but didn’t enter – too expensive at £14 to justify a flying visit and I’d been there before. The castle was used for some of the Hogwarts scenes. After restocking with supplies (pasta, sauces, fruit, chocolate and lunch), but forgetting breakfast ingredients, d’oh, I left Alnwick and made my way back to the coast, down to Howick, along to Craster (wondered if there was a Keep there aka Game of Thrones), and on to Embleton. 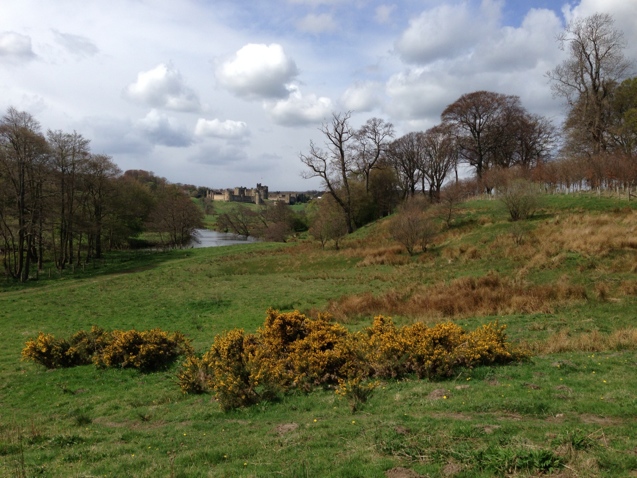 Passed a lot of sheep and lambs lying about in the sunshine. Do sheep lying down mean the same thing as cows lying down, that it’s going to rain? My Gran always said that about cows apparently. It did start to rain about an hour later so reckon so.

Northumbria is littered with castles, a testament to it being on the border with Scotland and more warlike days. I passed several more including Dunstanburgh, right on the coast. The below is the view from route 1 which passes right by it. 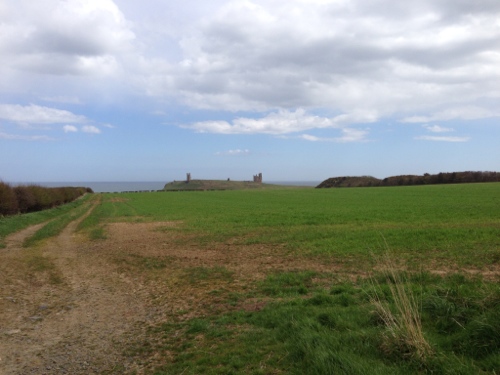 I did divert from route 1 briefly as it seemed to leave the coastline and I want to stick to it for the most part, but rejoined it at Seahouses, where you can get a boat a out out to the Farne Islands to visit the seals, colonies of sea birds, and St Cuthbert’s pad; he spent his later life there as a hermit. He was also prior of Lindisfarne (Holy Island) which was somewhere I wanted to visit later, but the tides were wrong to get across the causeway, would have to wait for another visit. 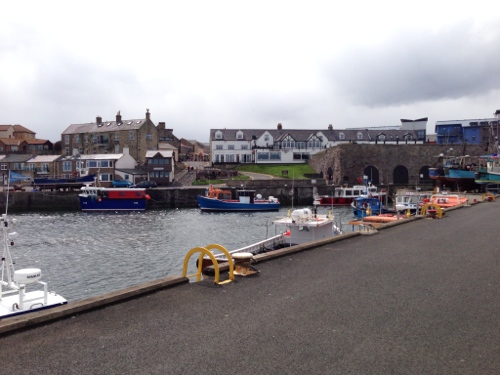 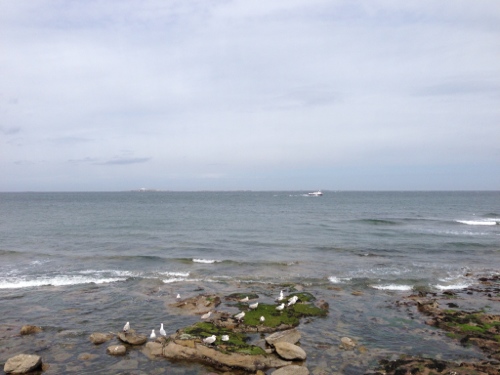 Farne Islands in the distance

I didn’t have time for a trip out to the Farne Islands today, and besides I’d been there before, plus it was getting pretty wet and cold. After having lunch (again) I chatted to a fellow Ridgeback Panorama tourer for a bit, always nice, before moving on up the coast past Bamburgh Castle which is very impressive, standing tall and imposing. 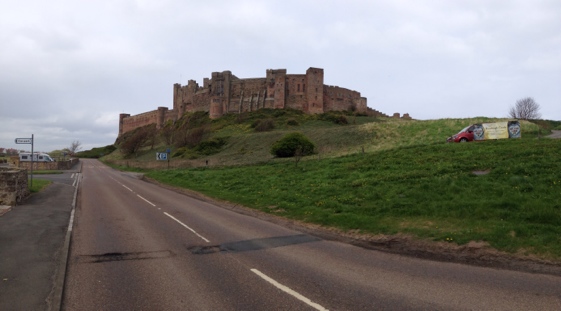 Think Bernard Cornnwall used this location as inspiration for Bebbanburgh, in his Uhtred books which are a great read, set in the period of Alfred the Great with battling Saxons, Normans, Christians and Pagans. If memory serves it was restored by the same person who built Cragside, Lord Armstrong, a great industrialist and inventor. Both places well worth a visit – Cragside especially but was somewhat off route.

I had to leave the coast post Budle Bay to avoid the A1, so moved inland on route 1, and up and down a few more hills. Met a couple from over the pond on heavily laden tourers on their way from Glasgow to Amsterdam, on their first visit to the UK. Nice to chat for a bit and they said how friendly and helpful they had found everyone so far, very encouraging. They started on the 01 May too, and were cycling into the headwind today which I didn’t envy them. Recommended a trip to Norwich on their way down to Harwich to get the boat. They were somewhat surprised I was in in shorts – said I was acclimatising for Scotland!

Continued on to Beal in the drizzle, and stopped at the Beal Barn Cafe for a hot chocolate, followed by a beer as it was still raining – got to keep hydrated after all. Beal is at the head of the causeway to Holy Island, but as mentioned the tide was in so it would have to wait for another visit. This is the second time this has happened to me, poor planning, maybe third time lucky. The Cafe has free wifi and was nice and warm so spent a good hour there sheltering from the rain, and downloaded a new WordPress app for my iPad, hence the photos now. Friendly staff too who gave me marshmallows for my hot chocolate, must have taken pity on my somewhat bedraggled state. 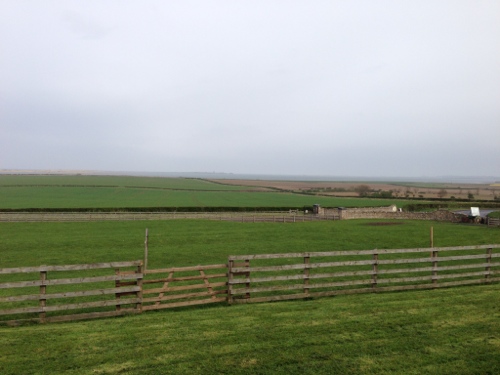 Holy Island in the drizzle

From Beal I headed towards Berwick-upon-Tweed. Had to travel on the A1 for a bit to make up some time, and I wanted to get to the campsite to get out of the wind and rain. The A1 was surprisingly okay, despite the big trucks – probably hit it at a quiet point. After an 8 mile stretch I turned off into Scremerston and headed into Berwick looking for the Pot-a-Doodle campsite – they have wigwams which I thought sounded cool. I doubled back through Wittal in a big circle, on a very bumpy route 1 along the cliffs which I was glad it’d avoided earlier. Eventually found the campsite back in Scremerston, but it was closed.

Rode back to Berwick and found a different campsite – East Ord House Park, which accepts tents and had a cosy spot for me next to a monkey puzzle tree. Quickly set up the tent and got a very welcome hot shower, before retreating to the on site bar for a huge plate of liver and bacon, side salad and onion rings. Really nice and very much needed. This was to be my last night in England for a while being only a stones throw from the border, so I had a couple of pints from the Belhaven Brewery, as recommended by the friendly clientele, to mark the occasion, whilst writing up my blog from the comfort of the bar.

All in all a great day at around 70 miles, and trip down memory lane, if a little tough at a couple of points; I did resort to playing some Pantera and Disturbed off my phone at a couple of points to get me up a few hills! Then Coldplay came on which slowed me down somewhat – this was on speaker by the way as don’t agree with cycling in earphones, but there was no one else to annoy apart from the odd bemused looking cow.

Off into Scotland tomorrow, and round to Edinburgh which I hope to reach in time to visit the office in St Andrew’s Square, should be doable depending on the weather. Looking forward to seeing Hugh and Meredith who have offered to put me up for the night.

Bike and body still doing well, although one unpredicted side effect of lots of cycling is a very dry nose, and think I might have burst a few capillaries therein. Will visit a chemist in Edinburgh but probably just needs to acclimatise to lots of outdoor activity!

3 thoughts on “Leg 9 – to Berwick-upon-Tweed via Northumbria”