Saw a lot of interesting things today, and weather was brighter! Bit of a long post.

A cold morning but brighter. Feeling famished I dived into a breakfast of pitta bread, cheese, bananas, flapjack and berocca substitute, realising I probably hadn’t eaten enough yesterday. It’s hard to take on board the required calories for this sort of day in day out riding sometimes. I spent breakfast mulling over a strange dream I’d had about recovering diamonds stolen by Nazis during the Second World War, and getting a reward for them when I returned them to their descendants via a contact of a friend, all a bit strange. I blame Lucy’s sisters blog which I’d read the day before and mentioned Nazis.

I packed up as the sun started to come out, a bit late to dry the two pairs of socks I’d washed last night, or my still damp towel. It had been too wet and cold to get anything dry of late, however I attached the socks to my cargo net to hopefully dry as I went along. Campsites rarely have drying rooms, and your stuffed wild camping anyway. My tent was also still damp and I wondered, not for the first time, if I’d not be better off just using a bivvy bag – on reflection I think a tent is better though.

With the Ridgeback loaded I gave it the once over. Everything checked out fine, despite it being a little more battered and grimy than when I first started, and with a few bits of gaffer and wire in places including holding together the front right pannier rack; I just call that a custom job.

I wasn’t sure how far I’d get today, so I loaded up on pies and doughnuts at a bakery in Dingwall for lunch, on the way out. There were 3 bakeries to choose from, that I sa. I chose Deas where my purchases came to about 5 pounds, a bargain. Scotland seems to have more bakeries that England, which have fuelled my progress around the coast pretty well to date; cheap, tasty, lots of carbs, and always have a nice chat with the staff. I need to find more black pudding and haggis though. 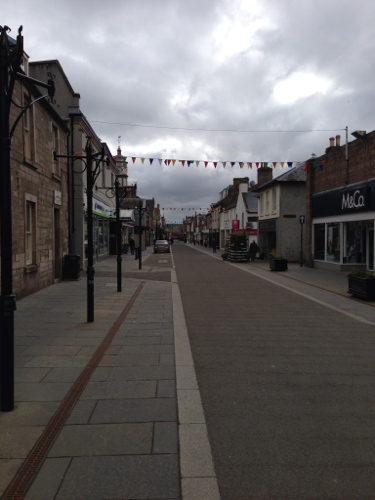 Post a second breakfast of a cheeky croissant from the same bakery, I pedalled to Alness. You can follow Route 1 and avoid the A9, but I stuck to the coast road which was a little busy. I hadn’t looked up where Route 1 went, and had been led astray by it before, or it had turned out to be really bumpy, so I generally left it alone today aside from where our paths converged on roads.

From Alness I rode to Invergordon, once site of of the main British Naval base in the early 20th century back when Winston Churchill was first sea lord. The base got moved further north to Scapa Flow, when it was realised it was in range of bombers from Europe. The fleet sailed from here for the Battle of Jutland in the First World War, the one great sea battle of that war. There was a submarine boon/net across the entrance to the Cromarty Firth back then. A German Sub once tried to sneak in under a British warship, and nearly made it; they had trouble raising the boon afterwards and found a big bit of the net missing. Also found a plaque commemorating the lives lost on HMS Natal, mentioned in yesterday’s post.

The sun dismissed the last of the clouds in Invergordon, and I took off a layer, still leaving two on not including the bib; it still wasn’t warm. There was a big cruise ship moored up, I guess where the old naval docks used to be, the MSC Magnifica haling from Panama, although every one I saw going back to it appeared to be German. Apparently quite a few cruise ships stop here, it being a deep water birth.

During the break I tried to phone Garmin again. I’ve been trying to get through to them for a few days but it’s impossible. You just end up with the message saying all their lines are extremely busy at the moment, and to check their website. I’ve already checked their website, and emailed them, to which I got a reply suggesting I call them. I think I need a replacement unit as this one is clearly bust, I can’t even perform the hard reset suggested. Think I’ll try calling them a few more times then email them if that doesn’t work. I hope my phone isn’t being charged for being on hold, could be expensive and will result in a complaint. Still feel better off with just a map though.

I pedalled on up the firth through Barbaraville, where I started singing the beach boys song Barbara-Anne, then down around the point to Nigg, to the shoreline opposite Cromarty. It was a bit of a long ride but worth it and followed my sticking to the coast plan. There used to be a ferry that ran from here but not sure if it still does, couldn’t see one, much better weather today though! 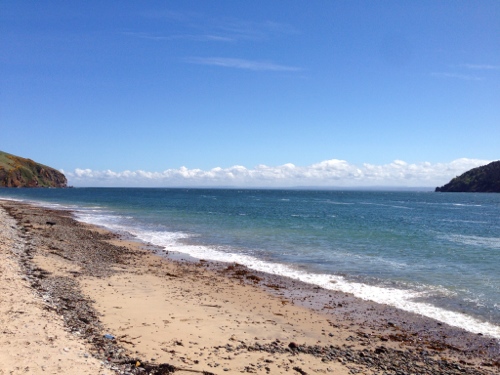 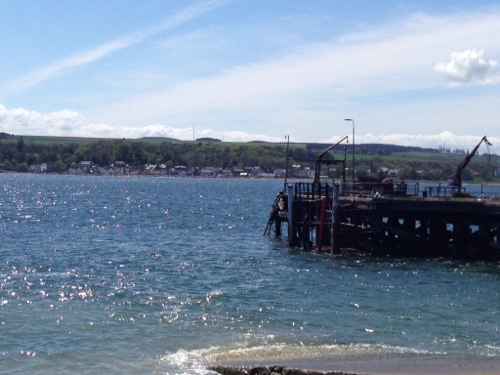 Cromarty on opposite shore

I could see where I’d been the day before, in much worse weather, I waved. Amazing how quickly the weather can change.

Me and lobster in Cromarty Firth

At this point I consumed the lunch I’d bought earlier; curry pie, pizza slice, Bridie (like a pasty but with different pastry) and a toffee doughnut, nice. Re-energised I rode on to Balintore and Shandwick Bay, on the Pictish Trail apparently. The Picts, descended from the ancient Celts that once lived across most of Europe, used to live in the area, and there’s a standing stone covered with their carvings just outside Balintore. It’s got a mixture of Christian symbols and Pictish artwork on it, carved in the 7th or 8th century, and pretty impressive.

This got me thinking about the Picts, about whom I know relatively little. I wondered what happened to them, did they all die out or get absorbed by other nations and cultures, the Vikings for example? Apparently not a lot is generally known about them, aside from their stone carvings and silverware which still survives. They’re also mentioned in writings from the same period, from other countries. I don’t think they wrote anything down themselves, probably using a tradition of oral history like the Australian aborigines. I expect their genes are mixed in with everyone else’s, Britain being a mixing pot of people from all over the place, so no doubt they still have descendants around today, even if those descendants don’t realise it.

Balintore looked lovely in the sunshine, and I could have easily whiled away a couple of hours down by the harbour, however I decided I couldn’t dawdle with more miles to cover today. 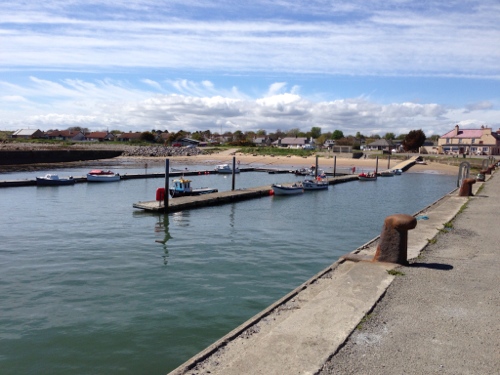 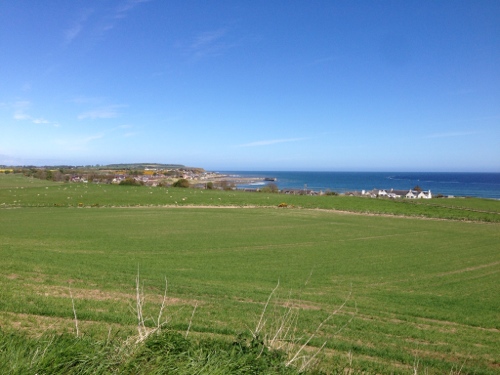 Looking down on Shandwick Bay

Post adjusting my rear mudguard which has a habit of slipping and rubbing the tyre slightly, I pedalled on to the other end of the peninsula. My pedals have started to squeak sometimes which is getting annoying, so I’m going to have to address it before they drive me to distraction. I arrived in a Portmahomack in the sunshine, which was persisting throughout the day, and cycled through the village. There’s a visitor centre there too which would be good to visit sometime if they have more stuff on the Picts. 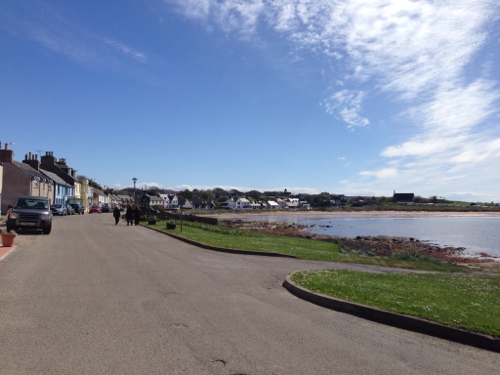 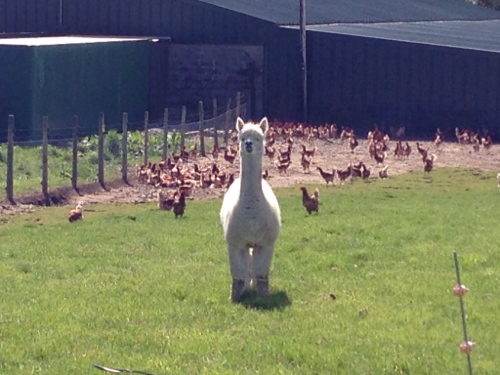 There were three Apaccas. They regarded me with some suspicion.

I rode on to Tain, where I stopped at the Duthus Inn (great name) for a pint of cider, it being a warm day. There were quite a few motorbike tourers pausing there too, so had a quick chat. I noticed I’d got singed a bit – forgot to put on sun cream! My face might be a bit stripy due to the cycling helmet and sunglasses.

I decided I had enough time to tackle the Dornoch Firth, it only just coming up to 17.00 when I left Tain. I knew there was a campsite in Dornoch itself on the coast. Passed a couple of distilleries including the Glenmorangie distillery, which apparently isn’t pronounced quite how we all pronounce it.

The ride around the firth was really great, spectacular scenery and sunshine, and not much traffic. I rode along the gently undulating road to Bonar Bridge, through more heathland and verdant forest – pine and Beech; think Beech woodland is my favourite, especially if it includes Copper Beech. 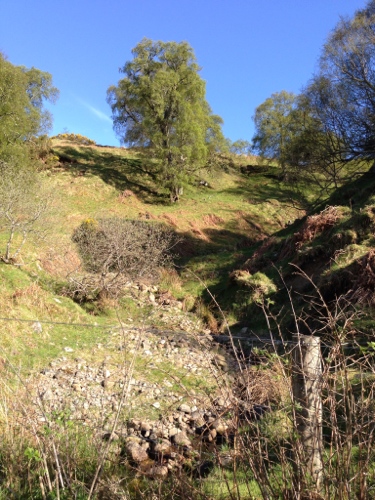 I passed quite a few other cyclists and tourers going the other way, and got passed by a couple of groups on sleek carbon fibre road bikes on their way to John O’ Groats judging from their outfits. They didn’t have panniers or tents, lightweights I thought ;-). Good to see other cyclists out though, probably the weather and it being a bank holiday weekend,  which I’d forgotten about. Can’t quite believe it looks like we’ll have had two good bank holiday weekends weather wise in May, must be a record, even if some of the rest of May has been dubious at times.

The ride up the north side of the Dornoch Firth was again beautiful, through a more forested landscape, though more hills to tackle. On tired legs this meant jelly baby consumption, however I made it all the way along without stopping so my legs must be getting stronger. I joined up with the A9 for a short section, going back to the bridge across the firth near Tain which I’d ignored earlier. I then cut North East up a side road that lead to Dornoch, a lovely looking town with a few shops, pubs and hotels, and main square with historic marketplace (photos tomorrow). Think this is where the Sutherlands were centred. I stopped to buy a few bits and pieces, including a multi pack of crisps – proceeded to eat about 4 bags I was so hungry by this stage.

I got to the campsite and pitched up about 19.00. Nice site right next to the beach, cost £7.00. Bloke said it was the cheaper of the two in the area so a bonus. I proceeded to cook up the traditional pasta feast, but might have overdone the Tabasco slightly; bit of an inferno but there was none left after only a short time. Finished off with a banana, an apple, more cheese, ginger nuts and a Pepperami I’d forgotten I had for good measure.

All in all a great day, covering 85 miles in predominantly sunshine, even if there’s still a chill in the air and snow on the mountain tops. The only slight annoyance is trying o get through to Garmin, they need to get more staff or stop issuing faulty badges of devices, something they apparently have a history of doing.