Post a good night’s sleep I woke up to a bright morning, and was on the road by 10.00 post a shower and shave. Remembered to put some sun cream on for a change! Feeling fresh I had a quick cycle around Dornoch, taking in the old square and market place, once the centre of commerce for the area, with several big fares held throughout the year; no doubt earning the Sutherlands a pretty penny. There was an old stone slab in the market place, one of only a few still in existence in Scotland, that was used to accurately measure out lengths of plaid/cloth/tartan.

The markets, or ‘Mercats’, apparently went onto decline in the early 19th century.

From Dornoch I rode up to and around Loch Fleet, passing seals basking out in the sunshine on the mudflats. Not sure if they were Common or Grey seals, in fact I didn’t know what they were at all at first as they weren’t moving. Then the incoming tide started to submerge their basking spot and they all decided it was time to find a new spot, en masse, was quite a sight to see them all shuffling/swimming off. Some were quicker than others, obviously wanting to reserve the best spot with their beach towels. Also saw a Grey Heron fishing just on from the seals, he lunged down from a motionless hunting poise and his beak came back complete with a small meal, must have been second breakfast time; I was starting to get hungry again. Saw the usual masses of Oystercatchers. 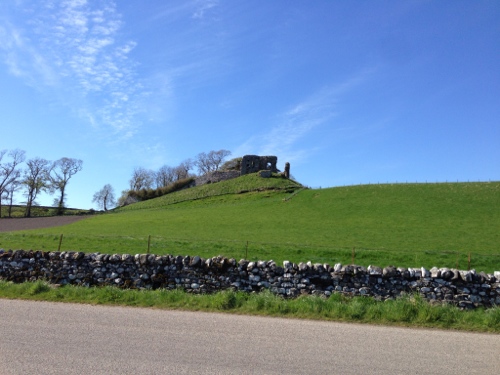 Castle on shores of Loch Fleet 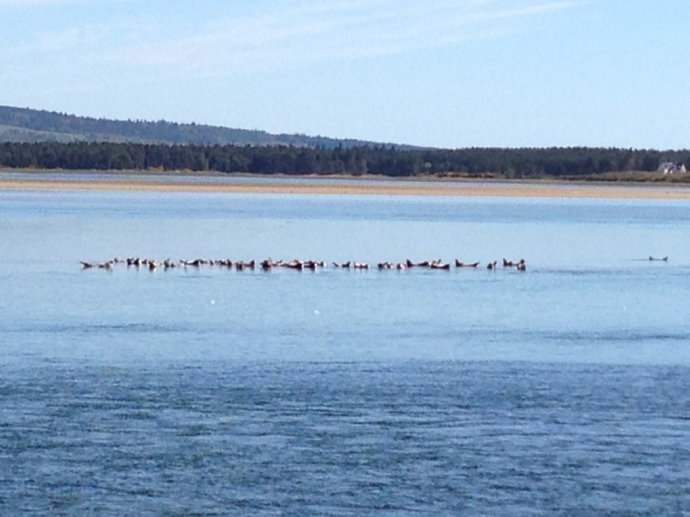 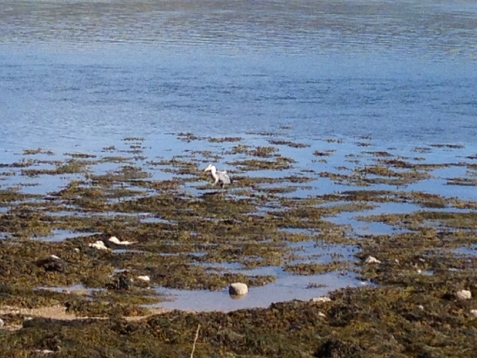 I could have stopped every 50 yards for another photo of something interesting but thought I’d better get on, and made haste around to Golspie. I passed a few cyclists going the other way, including one tourer with whom waves were exchanged.

I stopped in Golspie at a promising looking cafe called Poppy’s, and proceeded to consume their most excellent full Scottish breakfast, complete with black pudding, bacon, beans, egg, potato pancake thing, toast, mushrooms etc. I should have taken a photo of it but forgot in my haste to get stuck in, truly delicious – best second breakfast stop of the tour so far. Chatting to the owner I discovered the tourer I’d waved to earlier had been James Ketchell, on his way from John O’Groats to Land’s End (Jogle) in preparation for his round the world cycle starting in June. Check out his website – http://www.jamesketchell.net – he’s done a few great challenges such as rowing across the Atlantic. He’d stopped at the cafe too and had partaken of the same breakfast just 30 minutes previous. Anyway I heartily recommend Poppy’s Cafe to any hungry tourers passing through Golspie; you’ll need the energy for the next bit if you’re going north!

Leaving Golspie I pedalled on to Brora, through lovely countryside along the coastline, with only moderate hills at present. The gorse is really out in bloom at the moment, and not too much traffic on the A9 which I’d been nervous about, considering the bank holiday weekend. I stopped briefly in Brora to buy more bananas.

At Helmsdale things changed, with the terrain starting to grow more challenging. A long ascent got my legs going, followerd by lots of ups and downs through moorland and forest. The hills got really big again around Berriedale, steep and lengthy, leaving my legs somewhat burning by the time I reached the top only find to the scene repeated. I managed to make it all the way through this section without stopping, albeit in a very low gear, which I was pretty chuffed about; don’t think I could have done at a few weeks ago, on a bike this heavy. I really must deal with my squeaky pedal though as getting a bit irritating.

I rode on to Dunbeath where I stopped for a food break, raiding my panniers for calories to recharge on. A light north wind had started up which made the going a bit tougher, despite the hills getting milder. I pedalled on zoning out slightly, thinking about books again, as well as possible future plans; more expeditions – although I must finish this one first, opening a cafe/pub with a cycling theme somewhere – offering guaranteed high carb meals, 1000 calories minimum!

During the course of the day I passed several groups of motorbike tourers, who I kind of envied whilst going up the steeper hills. I still rather be riding under my own power though, less noisy and more environmentally friendly, reckon I see more to. I saw a group of buzzards circling overhead, riding the thermals, and wondered if they were waiting for me to expire on one of the steeper hill sections. Do they get eagles up this coast? I know they do on the west coast but not sure here, it would be great to see a Golden Eagle and a Sea Eagle.

Also passed a few abandoned villages today, in ruins. One was labelled as a clearance settlement, which tended to grow up along the coastline post the evictions in the 18th century I think, when landowners wanted to clear out tenants in favour of sheep farming. Not a popular move which displaced thousands from the more sheltered and fertile inland glens. Must have been a very hard and exposed life up here on the coast. Reminded me of a song by the band Goats don’t Shave which I used to play years ago – The Evictions I think it was called, will have to dig it out when I get home.

I continued on to Latheronwheel and Lybster under clear skies, but the terrain just seemed to keep repeating itself with more farms, livestock, and ups and downs through moorland. I passed a few highland cattle on which I heard a theory from my godfather and his wife. They think they are placed at strategic points by the Scottish Tourist board, and must complain about getting put in the same spot each year!

I was beginning to think the road was never going to end by the time I reached Thrumski, with only few miles to go to get to Wick. Interestingly I don’t remember passing any golf courses today, maybe they’ve finally petered out.

I made it too Wick about 18.30, after another great but leg straining day, covering about 65 miles. I camped up about half a mile from the town centre at a nice sheltered site, with easy access to the centre via a path alongside the river. Decided to go into town to eat as a reward for today’s efforts, plus I couldn’t face pasta again quite so soon. Ended up at the local Weatherspoons which was cheap and cheerful, with a huge plate of curry and a couple of ales – Belhaven Best again. They also had free wifi and I was able to recharge my phone and iPad which was handy. Aside from that it was quite an interesting cultural experience, with what looked like a few hen parties in, and a football crowd. Lots of enthusiastic drinking and general antics. A good atmosphere, but not the Champions League result everyone was looking for by the sounds of it.

Got back to the campsite but stayed up for a bit, it doesn’t really get completely dark up here, and the sky looked impressive. 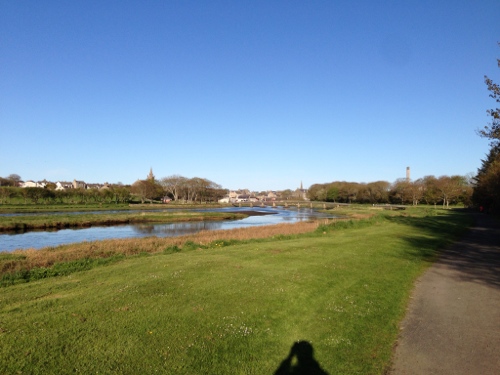 Path along river from campsite to Wick

On to John o’Groats tomorrow, and then Thurso. Hope this weather continues.