I was on the road by 09.30, feeling enthused about making it up to John o’ Groats and and seeing the North coast of Scotland. Might even bump into a few tourers starting their Jogles, or competing their Lejogs! I had a quick cycle around Wick before leaving. It was pretty dead compared with the previous evening, not many people having surfaced as yet, especially of the younger generation. Unfortunately didn’t find any cafes open for a second breakfast opportunity. 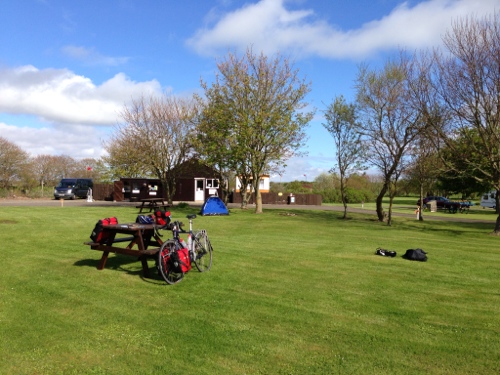 Waterfront nightclub, Not dissimilar looking from its namesake in Norwich

From Wick I cycled north under grey skies, and into a mild headwind making it chilly. The weather seems very changeable at the moment, there having been rain overnight, something you can hear very clearly in a tent. Think there must be a few weather fronts moving through, with the low pressure system that’s been sitting off the north coast finally moving.

I took the A99 up around Sinclair Bay, through Keiss and Freswick, and past Skirza, the latter two town names being Viking in origin. Think the Norwegians still ruled this area, at least loosely, until the 14th or 15th century. I’d read about how one of the last Viking adventurers had one of his strongholds around here but I couldn’t find it. Will have to look him up again. Going back to my Pictish topic of yesterday their must be loads of different bloodlines mingled up here, from Celt, Pict, and Viking, to more recent migrations. I love a bit of Viking history, having read Bernard Cornwall’s Uhtred books in which they feature. Hoping to get to Orkney where they’ll be more on them.

The road was relatively quiet, with more motorbike tourers out than anyone else, but I passed a few cyclists going the other way and waved. The landscape is mostly moor and farmland, and remained fairly consistent all the way to the north coast. I thought I could see evidence of peat cutting, which no doubt provided a great source of fuel in the past. On the subject of fuel sources I’ve seen quite a few coal trucks about in Scotland, so they must burn it in boilers still up here. I can’t remember seeing a coal truck down south for years.

Continuing on I passed quite a few older buildings in a dilapidated state, or ruins, providing a stark contrast to the newer homes built more recently. I thought the older ones looked more in keeping with the landscape, but would be a tad drafty!

Gorse in full bloom – stark contrast to the grey day

I pedalled on to John o’ Groats, but just before the Lejog finish line I turned right and cycled to Duncansby Head, the true most north easterly point on the UK mainland. Coming over the rise before John o’ Groats had been quite an emotional experience, even though I’m not doing a Lands End to John o’ Groats ride. I’d still been 26 days on the road and covered well over 1500 miles, and seeing the North coast with Stroma and Orkney in the background, with the sun coming out, caught me off guard.

Duncansby Head was worth a visit, there being a big seabird colony in the stacks nearby. There’s a lighthouse there built by Robert Stevenson, father of Robert Louis Stevenson of Treasure Island fame. He built quite a few of the lighthouses on this coast, including the one at Dunnet Head which I visited later. There must be a lot of lot of lighthouses on this coast, it being a little treacherous to shipping. 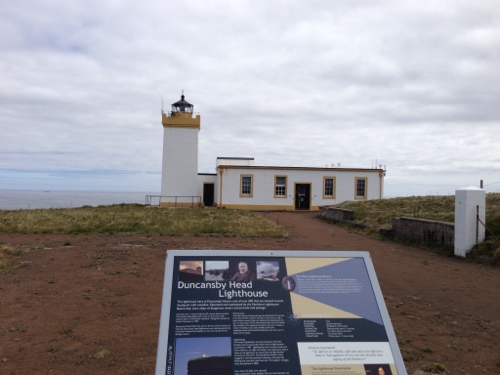 Apparently it’s a little short for a lighthouse, but makes up for it by being quite high up.

I cycled  back to John o’ Groats and down to the centre by the harbour, where the famous sign post is. Took some photos then had lunch in one of the nearby cafes – wanted pizza but they’d run out of bases so settled for a bacon, tomato and mozzarella panini, equally as good if not quite as carb heavy. It was great looking out across across the Pentland Firth to the isles, and I met up with Dan and Dave who’d just finished their Lejog, covering 980 miles – respect to anyone who’s completed the end-to-end ride. They’ve got a blog which is worth a read for anyone considering doing the same – http://www.2blokes2bikes2far.info

The Pentland Firth and seas around John o’ Groats, Stroma and Orkney are somewhat notorious, with tidal flows ripping through at up to 10 knots at times. The locals from Stroma used to guide ships through, however the island is now deserted and being reclaimed by nature, the last family having left in the 1960’s. At its height there were only about 360 people living there, earning a living primarily off fishing and as shipping guides. The fishing stopped when their main catch became depleted and too far to sail to, probably as a result of larger commercial fishing operations, a familiar story. 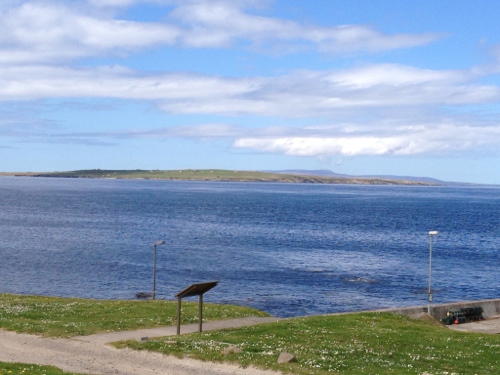 Bidding John o’ Groats farewell, realising this was nowhere near the end of my journey, I cycled west along the coast to Dunnet Head, via Mey and its castle, Scarsferry and Brough, through lovely countryside, although the sea does look pretty challenging to navigate through – rocks and rip tides – wonder if Will Copestake will be kayaking this bit of the coast. Check out his blog – http://willcopestakemedia.com/ , really interesting challenge he’s currently undertaking, affected by high winds like me.

Dunnet Head is the most northerly point on the UK mainland, and from it I had a clear view across to Orkney and the entrance to Scapa Flow, west to Cape Wrath, and back east to Duncansby Head. It was a bit of a climb to get up to it, but worth it. In World War 2 there used to be a lot of servicemen stationed up and around the head, keeping an eye on activity around Scapa Flow, the main British naval base which was under threat from bombing raids and other enemy activity. It must have been a challenging place to work when the weather turned nasty; there are still lots of old concrete buildings around where they used to live and keep watch. 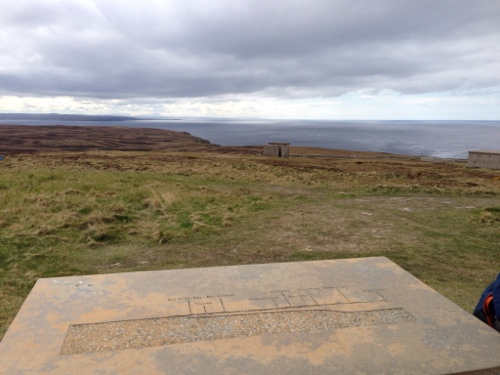 Looking west towards Cape Wrath, where I’d be in a few days, touch wood 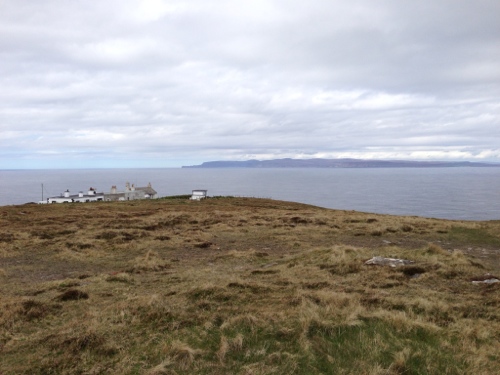 From Dunnet Head I rode along to Thurso, with a bit of a tailwind which was a nice change. I passed quite a few cyclists going the other way and having a considerably harder job of it u- gave them a wave. I realise I was now in effect doing a Jogle (John o’ Groats to Lands End), albeit via a somewhat convoluted route via Wales etc.

I cycled over the bridge into Thurso, and had a quick tour around, spotting a promising bar where I stopped for a pint and a meal – chilli burger. There was a live band on, two acoustic guitars who were excellent, doing a lot of old classic numbers some of which I can even play – Hotel California, Every Rose has its Thorn, Behind Blue Eyes, amongst others.  Great bank holiday atmosphere and would recommend the Y-not Bar, definitely rock and roll.

Leaving a little later than anticipated I found the campsite just outside Thurso and pitched up, it’s right on the coast with some great views. Also ideal for getting the ferry the next day across to Orkney, which I intended to do as a side trek. A little bit expensive though at £11.

I’d also been in touch with Mark Beaumont over Twitter during the evening, and we’d arranged to meet up tomorrow morning in the town for a chat and maybe some filming, more on that tomorrow. Really looking forward to Orkney and its scenery, archaeology, and people, south easterly wind getting brisker though!